Cardinal Schönborn Possessed by His Demons in the Cathedral

For about two years the bare breasted grotesque has defaced the Viennese Stephansdom and the memory of a Nun murdered by the National Socialists. 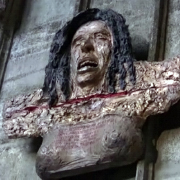 (kreuz.net, Vienna) On Saturday evening the Old Liberal Cardinal Christoph von Schönborn opened an exposition with the theme "The Cross in Sculpture" in his Cathedral museum.

This was reported by the Austrian news agency "kathpress".

On display are about sixty works from sixteen who hate the Church.

Among them is a satire of the cross, Blasphemers by Alfred Hrdlicka (+2009).

Hrdlicka considered himself to be an admirer of the Soviet murderer of peoples, Josef Stalin (+1953).

Old Catholic Baptism as an Opportunity


For his opening speech, the Cardinal went especially to Hrdlicka's botched works.

He struggled to describe Hrdlicka's parents, who had been slaves of Communism, as victims.

So they had allowed their son to be baptized Old Catheolic for that reason, so that their six year old son would not suffer any disadvantages during the glorious government of martyr and Bundes Chancellor Engelbert Dolfuss (+1934).

Actually, Dolfuss didn't belong like Hrdlicka or the Cardinal, to an Old Catholic or Old Liberal sect, rather the Church.

He was murdered by the National Socialists.  Even that would have been -- had he lived in this time -- not have happened to the opportunistic Cardinal.

Hrdlicka was always demonstrably atheist.  He was buried in 2009 by the Viennese scandal pastor, Anton Faber, in an enormous and public Catholic Funeral.


Even more striking the Cardinal mentioned a shameless 80,000 Euros which was paid in 2009 for the Hrdlicka ordered Demon Display which hangs in the Cathedral today.

The figure defaces a memorial of the Holy Nun, Sister Restituta Kafka (+1943).

Se was murdered by the anti-Catholic National Socialists.

The bust in the Saint Stephen's Cathedral shows a black haired whore with bare breasts.

The names of Communist political prisoners are engraved on it.

Heaven and Hell Can Not be Together

Cardinal von Schönborn  praised the disgraceful connection of the saintly nun with the Communist hooligans.

That shows that Sister Resituta was hung "in the middle of Communist street car workers in the Brigittenau" [20th District of Vienna].

The crucial difference between the two was not noted by the Cardinal:  while Sister was received into heaven, the executed Communists who went to their deaths despising God did not."


The prince of the Church found touching words for the political criminals.

As they supposedly  had committed "only crimes" in the eyes of the National Socialists, the Cardinal determined that the crosses on the graves of the "colleagues" could have been placed:

"In the Christian understanding, this deed was an act of mercy" --  as the Cardinal had a misfire.

Sister Restituta was supposed to have grown very close to the Communistic dregs in prison -- slandered the Cardinal.

Hrdlicka had memorialized this connection, in which he engraved the names of the Communists on the bare breast of his representation of  a witch.