The Oslo Butcher is For Abortion: Satanism

For a time Anders Breivik wanted to be Catholic.  Actually he remarked that Benedict XVI is a "cowardly, incompetent, corrupt and illegitimate Pope". 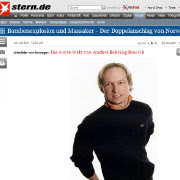 (kreuz.net) It is "thoroughly tedious" that the police continuously and immediately describe the Oslo Butcher, Anders Behring Breivik (32) as a "Christian Fundamentalist".

This revelation comes from the famous Italian specialist in cults and sects Massimo Introvigne (56) on the 25th of July.

According to Introvigne, who studied at the Vienna Observatory for Intolerance and Discrimination against Christians, insists that the concept "fundamentalism" can be a tool of anti-Christian discrimination.

Introvigne insists that the concept has a precise definition. It describes a very anti-Catholic current in protestantism.

Actually Brevik must be understood according to the following sources:

-his profile on the social networking site 'facebook.com'
-sixty site posting on an anti-Islamic, Norwegian website
-his 1500 page book "2083, A European Declaration of Independence", which he sent a few hours before the massacre to friends and the media.

Breiviks membership in the anti-Catholic Masonic Lodge was made known by an entry in his 'facebook.com'.

Introvigne explains that his present Lodge practices the Swedish Rite. This "Christian belief" is explained by his membership.

Fundamentalism is very ill-disposed to Freemasonry according to Introvigne.

Otherwise it comes from Breviks 'Facebook' profile that he has a friendship with the operator of the largest Norwegian porn-site -- "despite his decrpit morality" -- added Breivik.

It is also the case that Breivik had sent his book to an ordained minister of "The Church of Satan".

He published the botch job on the 23rd of July on the Internet. The "Church of Satan" is very widespread in Scandinavia.


He dreamt of a prostitute

The tone which Breivik struck reminded Introvigne of the Dutch Homosexual, Pim Fortuyn († 2002).

Fortuyn founded an anti-Islamic party in his country.

Still more, Breivik indicated in his book that abortion is acceptable.

The supposed fundamentalist reported additionally that he laid down two million Euros on the site.

He wanted to pay the money for the execution of his "mission" with a prostitute "of high quality, a real top-model".

According Introvigne's assessment, Breivik's biggest concern isn't religion, rather the 'war against Islam', which in his mind threatens to overwhelm Europe.

Breivig wrote that he had received baptism and confirmation at the age of fiteen.

He himself comes from a wealthy and Godless family, who allowed him "free choice".

Some years after veering into Protestantism Breivik came to the view that the Protestant community was dead and that it had fallen to multi-culturalism and philo-Islamic ideology.

For a time Breivig desired to become a Catholic, according to his own admission.

Actually, in his opinion the Church was sold to Islam, as the Pope then had decided, to engage in so-called inter-religious dialogue with the Moslems.

About Benedict XVI, he said, that he had lost "Christendom and the European Christians".

He must be termed as a "cowardly, incompetent, corrupt and illegitimate Pope".

For that reason Breivik wanted to eliminate the protestants and the Church, and a "Christian Congress of Europe".

From that he expected a completely new "European Church" to arise.

I am one of those taking a "wait and see" attitude to this thing. There is, as usual, so much back-and-forth misinformation going on that it would make more sense to be prudent and wait for all the facts to come out. Look at the New York Times, for instance: immediately they were pronouncing this as a Muslim terrorist act and now find themselves with much egg on their faces when it surfaced that this guy is fanatically pro-Israel.

As to his "fundamentalist Christianity" that is just the usual media slandering...BUT this man was/is a follower of the lunatic ravings of people like David Horowitz, Pam Geller and the ubiquitous nincompoop Robert Spencer, all three of whom are engaged in hotting up anti-Muslim hysteria (even when their "facts" turn out to be wrong or are products of the usual well-funded propaganda apparatus).

So I advise caution. Let us wait for more information to come out. The above article is very good, to be sure, but it does skate around the edges of making a premature judgment.

I knew he was a Satanist as soon as it happened. I was thinking of Varg Vikernes whose confused ideo-religious world-view corresponds to this guy.