Breivik Worshiped the Israeli State and its Army

Editor: Surprisingly, it doesn't seem like anyone's mentioned the obvious connection between this individual and Varg Vikernes, who essayed to blow up Norway's oldest church with 150kg of explosives and was implicated in numerous church burnings. The Wikipedia seems to lose sight of the fact that he is a convicted murderer, but that's Wiki for you.

The Norwegian Butcher fantasized about a return to the past in order to kill Hitler: "If there is a single person who I hate, then that is Adolf Hitler". 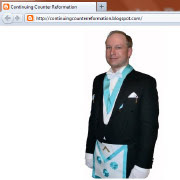 (kreuz.net) The Norwegian perpetrator Anders Breivik, didn't make an enemy Islam as an enemy, but also made a friend, - "the Jewish World, which he views as a sure anti-Islamic bulwark".

Sect Specialist, [and Sociologist] Massimo Introvigne (56), said this on the 25th of July for the Italian website, 'labussolaquotidiana.it'.

The terrorist indicated in his 1500 page book "2083, A European Call to Independence" an "actual cult for the State of Israel and its Army".

This Israel Cult involved a deep animus against the National Socialists:

"If there is a personality that I hate, then it's Adolf Hitler" --wrote the mass murderer.

He fantasized about a return to the past in order to kill Hitler.

The Purest and Noblest Inhabitants of the West

Breivik was a participant in a Norwegian neo-Nazi Internet forum.

There he explained that certain National Socialist statements about the ethnic salience of the West were correct.

But: "Hitler's most obvious error consisted, according to Breivik, that he hadn't understood, that the purest and noblest inhabitants of Europe were the Jews" -- recapped Introvigne.

If National Socialism should have killed anyone, they would have better sorted out the Muslims in the near east.

For Breivik, National Socialism, Communism and Islam were three sides of the same anti-Western doctrine.

He wouldn't to abolish all three.

But actually, the emphasis was all on the battle against Islam.

For him, every actual or potential enemy of Islam is a potential ally.

Breivik not only encouraged Christians, rather also militant Atheists, who are seemingly all too common in Norway, as well as homosexual deviants, to combat Islam.

The latter he pointed out, would be "persecuted" in a world ruled by Islam.

Contacts to "The Church of Satan"

Introvigne is not astonished by Breivik's contact to the "Church of Satan".

This organization preaches a form of "rationalist" Satanism and values the mastery of the strong over the weak as well as a wild Capitalism.

Breivik even believes that the Gypsies are not as the majority of Historians see them, from th Hindus, rather outcasts from Islamic societies.

Breivik is well-disposed to gypsies.

He calls them to the war against Islam and promises them a free and independent state in his new Europe.