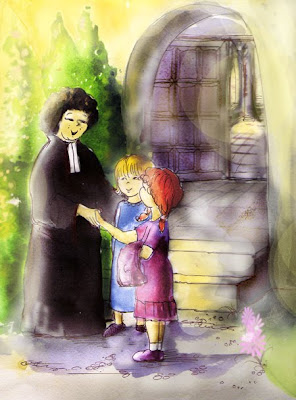 Editor: Reminds us of the old saying, "we'll get to you through your children", or the Jesuit adage, "give us a boy till seven, and I'll show you the man" The following was translated from the website, "The Catholic Church in Germany" put out by the German Bishops, thank you very little. It's a children's book which features a visit by two friends of different confessional backgrounds to each others churches.


Lena is protestant. She and Laura are good friends. Last Sunday Lena asked: "Would you like to go with me to Protestant Service?" And Laura said yes.

There was a lady pastor here

Laura and Lena sit in the first bench. The organ began and a woman in a long black robe entered the church. "Is that a nun?", whispered Laura. "No, that is our Pastoress", answered Lena. Laura was astonished and wanted to know: "May women be Pastoresses with you?" "Yes", said Lena, "and they may also mary and have children."

The Pastoress announced what was new in the church community. Then the organ began to play the entrance hymn: "Where two or three gather in my name, then I am among them." "I know that!", exclaimed Laura. And she sang enthusiastically along. Laura wondered to herself. For the differences of the Services in the Protestant church didn't differ much with the Catholic Church. Actually, she liked some of the differences.

The Profession of Faith [sic]

The community stood up and prayed the Profession of Faith. Laura prayed with. Except for one single word, everything was the same. Catholics pray: "I believe in the Holy Ghost, the Holy Catholic Church..." in the Protestant church it goes "...the holy christian church..."

.Laura learned that the Protestant Christians like those in the Catholic Church go to the altar and receive a Host. Lena exlained:"For us it isn't called Communion, rather The Lord's Supper. And we don't only receive the bread, rather we drink the win or juice from the chalice." Laura was careful to notice, as the Pastoress said the words of institution that Jesus had spoken at the last supper: "This is my body..." - "This is my blood...". "Just like us", thought Laura. Actually, at the consecration the Pastoress didn't raise the chalice and bread up. And there was no bell.

After the Service the Pastoress stood at the church door. She gave everyone leaving a warm shake of the hand and wished them a beautiful Sunday. Laura smiled to her. The Pastoress spoke to her: "I don't think I know you." "I am really Catholic," answered Laura. "But today I'm with Lena here. She is actually my friend." Then Laura asked the Pastoress about the differences between Communion and the Lord's Supper. The Pastoress explained: "Bread and Wine are for us really the body and blood of Christ. But first then, only when someone has eaten the bread and drunk the wine or grape juice. And also only then, when he believes in it." Finally the bread is really ordinary bread. And the chalice has also normal wine or grapjuice. In the Catholic Church bread and wine are really the body and blood of Christ. And when consecrated Hosts are remaining, they are placed in a tabernacle." "I knew that", said Laura. "It is completely gold and looks like a treasure chest." "You may gladly return, if you still have questions", said the Pastoress. "Great", said Laura and departed. But on the next Sunday Lena will come for the first time to the Catholic Church. And then she can meet the Catholic Pastor, Locher, and pester him with questions. That pleased Laura and Lena very much. "

H/t: summorumpontificum.de Where the above was given as an example of Protestantic relativism in connection with Father Finnegan of the Hermeutic of Continuity sojourn to Rome where he writes the following in his report on October 29th :

Yesterday I was given the altar of St Michael the Archangel for Mass at St Peters, and this morning I was pleased to be able to use the altar of St Pius X. Things have changed a lot since Summorum Pontificum there are now plenty of young priests around the Basilica first thing in the morning celebrating according to the usus antiquior. I like to go around a little before saying Mass and attend the consecration of various other Masses before saying my own.

So, the protestant relativism hiding out in German children's lit wasn't a lost cause after all.