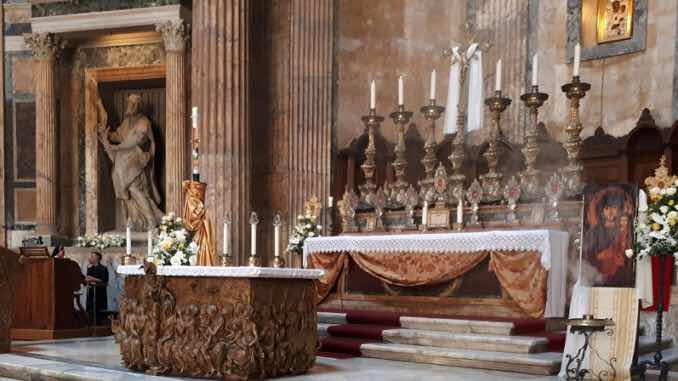 (Rome) 1409 years ago one of Rome's most famous monuments was converted into a church. After just as long a period, almost 50 years after the liturgical reform of 1969/1970, a fixed, so-called altar was erected and consecrated.

On May 13, 609, the Catholic Church Sancta Maria ad Martyres was established from the Pantheon of Emperor Hadrian, the pagan temple dedicated to all the gods. 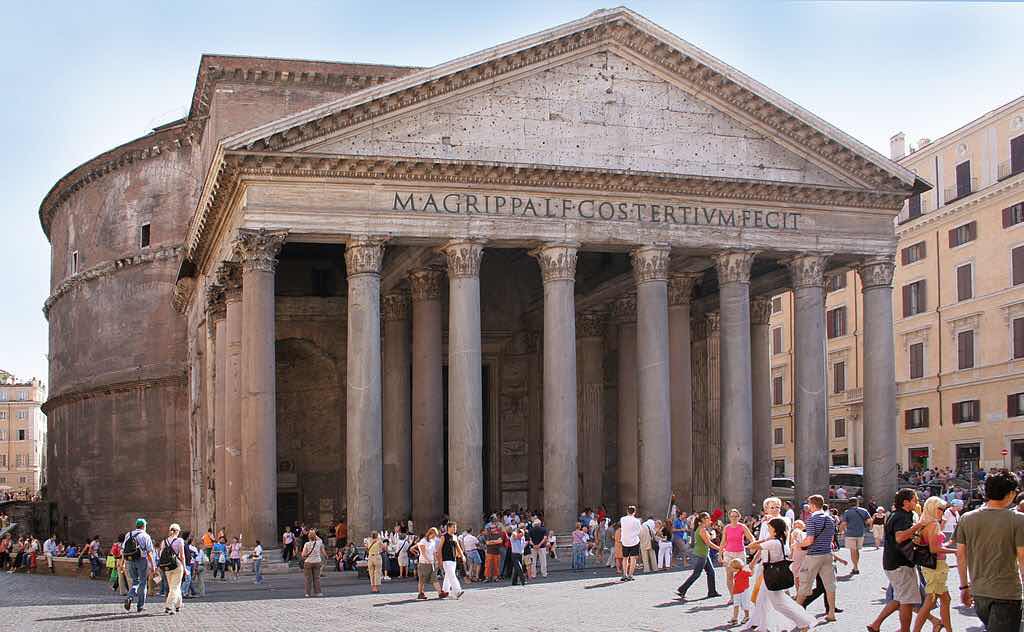 
The transformation was part of a comprehensive Christianization of Rome. Christianity had overcome paganism. The Christians, who were repeatedly subjected to bloody persecution during the first three centuries of the Roman Empire, hesitated for a long time to adapt the pagan temples to the Christian cult. They waited until the pagan belief in the gods had largely died. Only then did they consider it possible to take over the idol temples. More than 1400 years ago, the solemn purification, the lustration, of the Pantheon took place in this context under Pope Boniface IV (608-615).

The "Pantheon" is a tourist magnet. If you want to see the sights of Rome, you will not miss this building, which will soon be 2050 years old. On Sundays and public holidays regular mass celebrations take place, as well as yesterday for the Solemnity of Ascension and at the same time consecration of the church. While the official website of the tourist attraction did not mention it, a reference to the website of the basilica was found in the days before. The 1409th consecration day should also mean a profound intervention in the presbytery.

As usual, the Solemnity was celebrated at 10.30 am yesterday by Canon Mgr. Salvatore Genchi. There is a collegiate staff attached to the basilica, the only surviving one in Rome alongside those at the four Patriarchal basilicas. The pastor is the Italian military bishop. 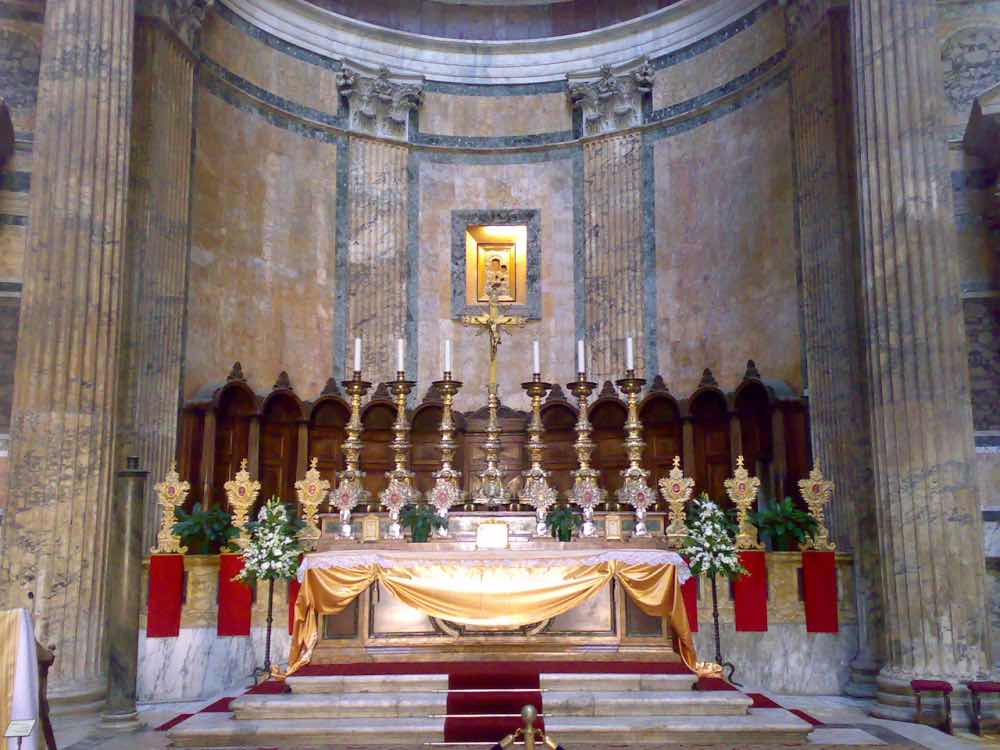 The main altar so far

Yesterday, a fixed, so-called "people's altar" was consecrated, thus creating that altar duplex with the main altar, which became the strange "characteristic" of the liturgical reform of 1969/1970.

The intervention was quiet and silent, which is why it is not known which representative of the competent office of monuments gave his consent to make the main altar on which over many centuries numerous saints, popes and priests celebrated the Holy Sacrifice of the Mass "superfluous" or it may be used to disguise the view. It is a true repression. The altar of the people was erected so close to the steps to the historic main altar that it was made practically unusable for a celebration in the traditional form of the Roman rite.

The artistic statement of the new national altar is described on the Basilica Internet page. In addition, the Apostolic Exhortation Gospel of Gospel is quoted by Pope Francis:

"It is good that every catechesis pays special attention to the ‘way of beauty’ (via pulchritudinis). To proclaim Christ is to show that believing in him and following him is not only true and just, but something beautiful that, even in the midst of trials, life can be filled with new splendor and deep happiness. In this sense, all expressions of true beauty can be recognized as a way to help meet the Lord Jesus. It is not about promoting an aesthetic relativism that could obscure the indissoluble bond that exists between truth, goodness and beauty, but to regain the esteem of beauty in order to reach the human heart and in it shine the truth and goodness of the Risen God” (Evangelii gaudium, 167). 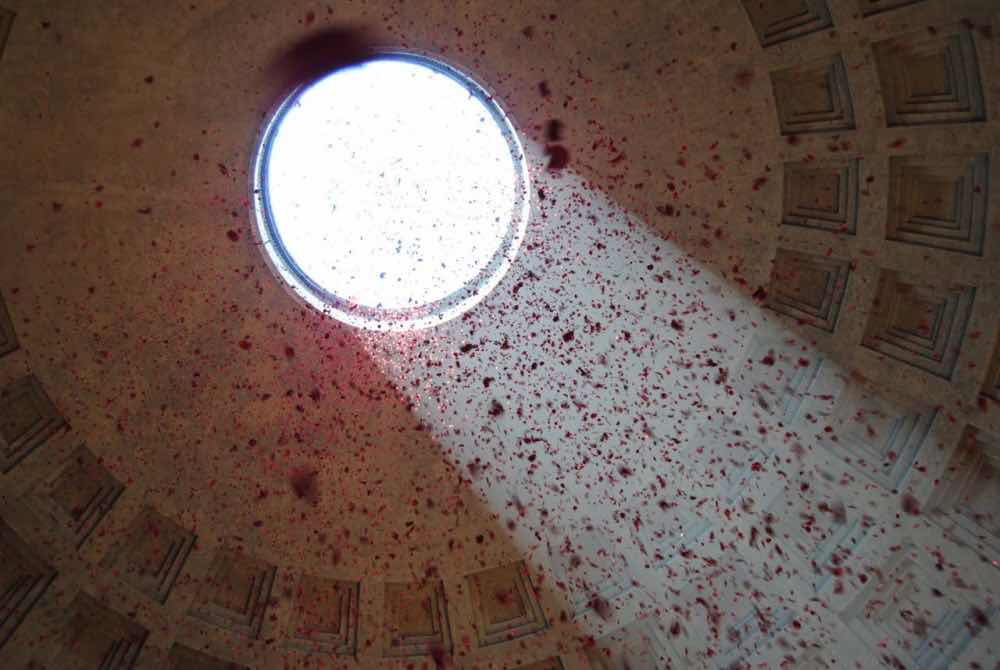 On May 13, 609, as can be read in the papal annals, Pope Boniface IV carried out a "shocking exorcism" of the pagan temple before he proceeded to the solemn consecration of the basilica. The temple had been transferred to him the year before by the Byzantine emperor Phocas (602-610). After the outer purification, the gates were opened and the Pope entered the temple, which had not been entered by Christians until then. "An immense crowd" attended the event. The chronicles tell of frightening noises and terrible screams that came from within. The demons and idols "yowled horribly" because they were aware of being driven out. The Pope prayed and consecrated the building to Christ, so that the demons flew out of the old temple amid tumultuous noise. 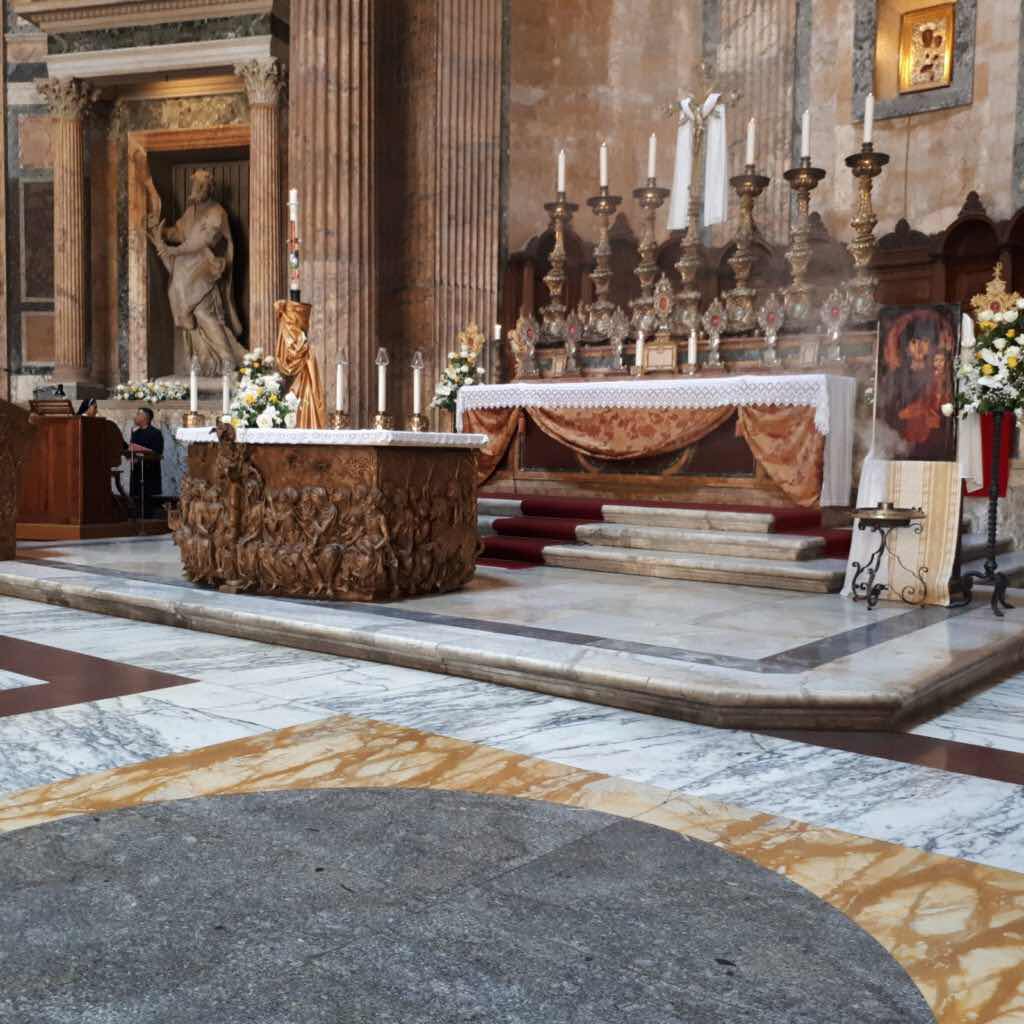 The mystic Anna Katharina Emmerick (1774-1824) also saw in a vision the cleansing and transformation of the Pantheon into a church.

In remembrance of the time of the persecution, Boniface IV consecrated it the Basilica of Our Lady and all the martyrs. In addition he left many relics of martyrs, the tradition reported 28 cars full, under the now repressed main altar. From the formerly gilded bronze ceiling of the dome, Pope Gregory III. (731-741), Gian Lorenzo Bernini 1624-1633 created the nearly 30 meter high canopy above the tomb of the Apostle Prince Peter and the Pope's altar in St. Peter's Basilica.

The basilica houses famous artists, including Raphael. There is also the burial place of the kings of united Italy.

Here's a picture of the week from the site of the SSPX German District. The deformation of the churches just doesn't seem to stop.

This is a wooden block with a hole in it which is supposed to be an altar, and a cross with a corpus which recalls a stick man. The Holy Ghost Chapel in the Elder Hostel in Wiesbaden has earned the rubric "Picture of the Week". 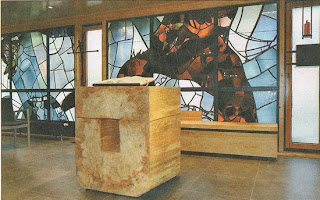 Posted by Tancred at 1:05 AM No comments: