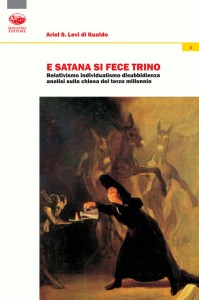 (Rome) He is young and combative, his life was a struggle between Judaism and Christianity, he decided for Jesus Christ and became a Catholic priest. The talk is of Ariel Gualdo di Stefano Levi, born in 1963. He is a student of the Jesuit Peter Gumpel, a priest of the Diocese of Rome and has the fire of a convert. He is the author of several books and editor of the theological journal series Fides Quaerens Intelletcum. In 2007 Erbe Amare, il secolo del sionismo (Bitter Herbs: The Zionist Century) appeared, 2009 Nada te turbe, 2011 E Satana si fece Trino relativismo, individualismo, disobbedienza. Analisi sulla Chiesa del terzo millenio (And the devil makes ​​himself triune. Relativism, individualism, disobedience: An Analysis of the Church of the third millennium).

The Priest and Jewish convert's writings to provoke

Each of his works is like a cold shower and a heated provocation at the same time. It is this emotional roller coaster Levi di Gualdo wants to achieve in his readers. A tepid middle ground does not exist for him. The most recent book, The Devil Made Himself Triune is a razor-sharp polemic from the priest and theologian, as it is explained in the subtitle. In order to tap the full meaning of the title, it is necessary to resort to the Church Fathers. St. Jerome and St. Augustine described the devil as a monkey god. A monkey aping God to turn things upside down and create a parallel perception to reality.

The book is divided into three parts. The first part is dedicated to the free loyalty and obedience to the Church. The Second Vatican Council was “deformed by the post-conciliar theologians into a egomaniacal Council" and abused as an instrument of apostasy and rebellion within the Church. The neologism of "ecumenical" and "egomaniacal" gives you an idea of ​​Levi di Gualdos militancy.

An Absolutist Mind at all Times is Characteristic of Apostates 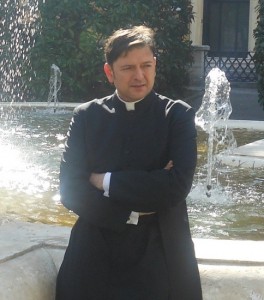 Substantiated without circumlocution and with plenty of buttressing, the author assails the progressives in the Church who pretend to be an army of priest and theologian rebels, who are always have their mouths open and are ready at any time to demand "more collegiality and democracy" but to have built true dictatorships in the church at the same time.  "The hegemonic and absolutist mind is not something typically conservative, but rather of the apostates of all time, who gave rise to the worst forms of the suppression of freedom of thought and made the dominant opinion into a forced unity.”

This small army of dilapidated priests in jeans and tie theologians, who have neared to the people of the church, have initiated forms of clericalism, as they had never been before. The consequences were that "after decades of theological and liturgical scurrility, oddities, the churches of the West are half empty, and the crisis of credibility weighs like an executioner's ax on the clergy." The presumption of this modern clericalism was to reduce to the author, God, to an object, which one could impose one's will. "This fact leads to the denial of God as a God who is no longer recognized as the Lord of life and history.”

Bultmann to Ravasi - Is the condemnation of Modernism by Pius X no longer valid?

As an example, the author draws the chapter "From Bultmann to Gianfranco Ravasi," the world of ideas published by Cardinal Gianfranco Ravasi, president of the Pontifical Council for Culture an "autopsy". Here Levi di Gualdo raises the question of whether the contents of the Encyclical Pascendi Dominici Gregis, with Pope St. Pius X. Modernism condemning it as a synthesis of all heresies would still be valid today. The question is of crucial importance, since many of the Pius X theses condemned today the basis of numerous published theological writings expected to be learned in the theological faculties and seminaries. "The question that arises is: This happens because of the changing historical circumstances that the validity of those condemnations is extinguished, or is it because the soldiers have risen from the belly of the Trojan horse and now frolic inside the walls?”

Levi di Gualdo maintains that Cardinal Ravasi illustrated in the preface to the first, the Italian edition of the first volume of the work, "Jesus of Nazareth" by Pope Benedict XVI. that the use of “real” instead of “historic” is able to contradict what the Pope says in the book. The author sees this as "the usual word game” used by Bultmann and the thesis of the reality of the myth. "A thesis in the preface to the book of Benedict XVI. hurled like a ripe tomato against a white wall. “

The second chapter of the book is devoted to the psychological homosexualization the Church, which accounts for the author and held to be far more serious than the pedophilia scandal. In Church history it was made an unprecedented phenomenon in the last decades. Homosexuals have created an internal Church lobby, which they operate with mafia-like methods. This lobby has created a form of clerical Pornokratie and has a negative effect on the life and institutions of the Church. "The request from the Holy See for years has forcefully imposed, not to ordain candidates with open or latent homosexual tendencies, that is simply ignored by many dioceses in which they act contrary to Roman directives. You can not have peace of mind, when severely limited to strict public statements, while a homosexual priest then increases his, in the same proportion as the bishops increase who march parallel to the ideological advance of homosexualization, proceeding in concert with a latent homosexual psychology. Or to put it more bluntly: some seminarians in the seminaries formed "religious brotherhoods” during in the 70s and 80s are today bishops, and no sooner had it, than they have to be first surrounded with like-minded subjects who systematically are placed in all key positions in the diocese, including seminaries where they mutually protect each other and reproduce.”

Rome must remove Homo-bishops - to Crush the Snake's Head

Ariel Levi di Gualdo assesses the decision "to be moved to concrete action: removal of the bishops from their diocese who promote and propagate homosexuals to the sanctuary.” It means that the Church “is to be cleaned of this dangerous homosexual decadent disease," says the Roman priest. "In various dioceses in which homosexuality has come to power, today the heterosexual candidates are excluded from the ordination. If they are already priests, they are discriminated against and discharged by a homosexual lobby. Appeals and recommendations at this point are no longer sufficient, readiness must be to cut the snake off at the head.” The author himself doesn’t lack a sense of humor in this subject. “In view of a blatant case", but this by no means was even a single case where in a diocese "in the last 20 years, eight of ten ordained priests" had “evident operational errors”, then “it suddenly struck me," and I said to the bishop, "he would have rather been consecrated as the prioress of the Discalced Carmelite nuns, as the Reverend Mother was the last man in the clergy of his diocese.”

The third chapter is devoted to the freedom of free choice of the people for good or evil, will be discussed soon.