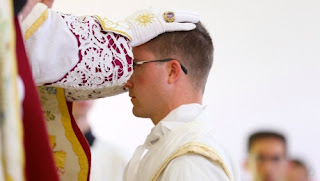 The General Superior of the Priestly Fraternity of St. Pius X recalled in his homily the great dignity of the priesthood:

In the Holy Eucharist, our Lord gave a means to multiply Himself. There is only one Jesus, one Body, one Soul. And in each host, He is completely, fully there. He multiplies Himself through the real presence. But He hides Himself. For our Lord Jesus Christ, His species is the priest, though the man that is the priest is still present. Our Lord is the priest and the victim. There is only one priest, Jesus. Only Jesus absolves in confession. At Mass, the priest opens his mouth and says, ‘This is My body,’ and it is Jesus speaking. These words do not belong to the man; they belong to Jesus.
The only one who has the might in His words and to produce what He says is God. In Genesis, how did God create? By speaking. By His might He makes what He says a reality.This might is given to the priest when he gives the sacraments.
When the priest speaks, the whole, infinite holiness of God comes through. The priest’s hands are consecrated – they are dedicated to give blessings. It is beyond understanding what kind of treasures God has deposited to His priests. The priest himself is an incomprehensible sign of God’s love. St. John Vianney said that if we understood what a priest is, we would die of love.
A priest is a mediator, a key, one that reunites God and man after they have been separated by sin. The priest repairs the damage caused by sin. When God chooses a priest, He chooses a victim. It is hard to understand. Our human nature does not like it. But a vocation is a call to be a sacrifice.
Every Mass is a sacred sign of an invisible sacrifice. In a Mass, our Lord Himself perpetuates the sacrifice of Calvary. This sacrifice is consummated with the Communion of the priest. The priest is obliged daily to make this sacrifice. In each sacrifice, we priests offer ourselves. Each priest should say, ‘I am immolated with the sacrifice on the Cross. I am dead with Jesus.’ That is the priest that will cleanse sin from the world. To be a priest is something serious. Modern men want to get rid of sin; they have no sense of sin. They want to get rid of mortification and death. But Our Lady said souls will go to hell because no one makes sacrifices for them. A sacrifice hurts.
Charity, which is love, is difficult to really understand. It is gentle and kind and good, yes. Those God loves the most – look at what He requests of them. Who does God love more than the Blessed Virgin Mary? And we know what God had planned for her.
Link to German District Website...
Link to SSPX USA....
AMDG

Priestly Ordinations in Germany by Bishop Huonder of Chur, Switzerland 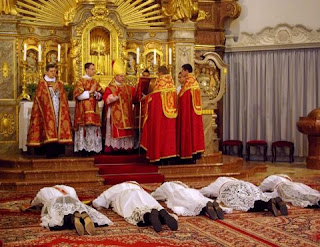 This is from Accion Liturgica: The embattled Bishop Vitus Huonder, Bishop of Chur (Switzerland), has conducted ordinations in the Immemorial Mass of All Ages for the Priestly Fraternity of St. Peter, in Lindenberg, Lindau, Germany, on June 29th, the feast of Saints Peter and Paul. FSSP 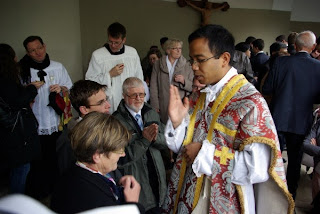 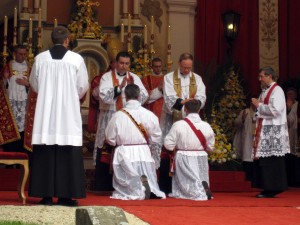