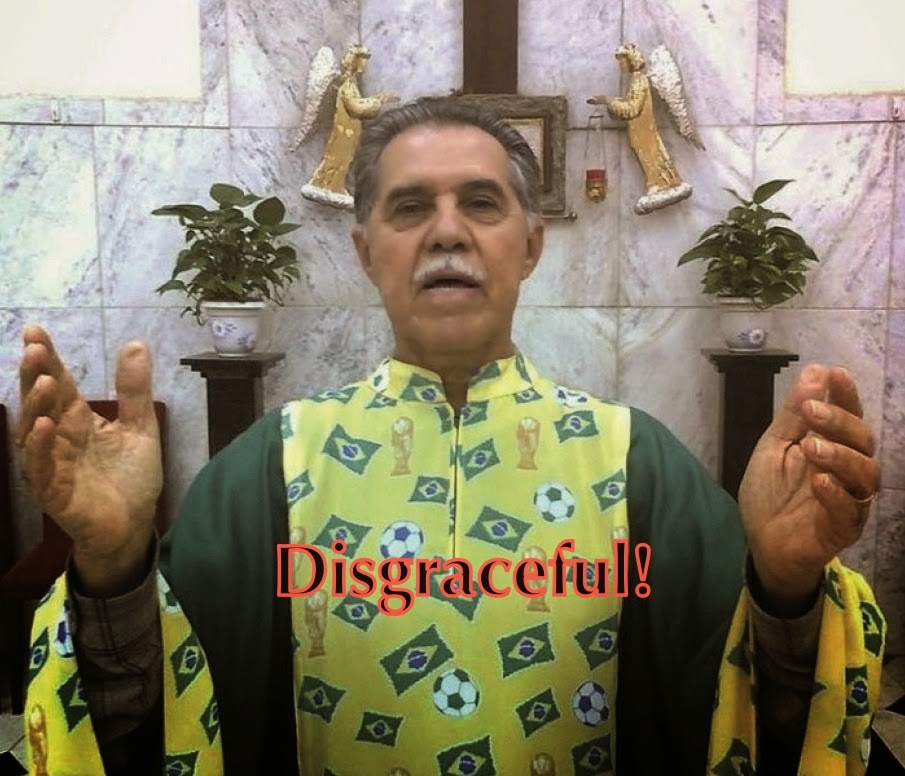 (Rio de Janeiro) Today was  the kickoff of the World Cup 2014. The hosting country of the greatest football spectacle is Brazil. Just what demonstrates enthusiasm for the leather ball, or it is better to speak of fanaticism, is shown by the Brazilian priest Luiz Carlos Magalhães.
As the Brazilian Correio Popular reported last week, Reverend Magalhães has customized his own chasuble in the colors of Brazil for the World Cup. But not only that  the Chasuble is decorated in green and yellow, there are  dozens of small Brazilian flags and footballs on it. Magalhães is pastor of the Catholic parish of Cristo Rei of Campinas and it is by no means the first time that the pastor Magalhães has behaved erratically. Already during the Football World Cups of 2002, 2006 and 2010, he celebrated the Holy Mass during the World Cup in his football chasuble.

"God is Brazilian, but I Fear Competition, Now There is an Argentinian Pope"

The closer to the World Cup, the more Pastor Magalhães gets out of control. Frankly, he appears in public, with his quirky "chasuble" to violate the liturgical norms, and has been doing this for 12 years. When asked about this   Magalhães replied: “What’s the harm? Everyone knows that God is Brazilian.” In 2014 concerned the football fanatics only care about one thing:  ".. I fear a strong competitor, now that the Pope is an Argentine.”  He had always been football enthused confesses the 67-year-old priest," The World Cup is a unique moment in our country. Brazil has many problems, but now is the time for joy, serenity and patriotism. "
Text: Giuseppe Nardi
image: Correia Pupular (Screeenshot)
Trans: Tancred vekron99@hotmail.com
Link to Katholisches…
AMGD
Posted by Tancred at 9:22 AM 1 comment: