Press Conference by the Special Envoy Archbishop Hoser in Medjugorje: "On the Question of Truth I Can Not Say"

(Medjugorje) The Pontifical Special Envoy for Medjugorje, Archbishop Henryk Hoser, Bishop of Warsaw-Praga, gave a press conference this afternoon in Medjugorje. Hoser indirectly confirmed a link between the Motu Proprio Sanctuarium in Ecclesia, published on April 1 by Pope Francis, who provided for the internationalization of prayer places by the transfer of jurisdiction to the Pontifical Council for the Promotion of the New Evangelization. Archbishop Hoser said that "Medjugorje is already part of the new evangelization."
The Polish Archbishop was appointed Special Envoy for Medjugorje by Pope Francis. A direct connection with the aforementioned motu proprio is seen because it was signed by the Pope on the same day, although it was only published last Saturday. Archbishop Hoser has been in Medjugorje since last week and will probably stay there for a longer period. Before the end of the summer, according to his mission, he has to submit "pastoral solutions" to the Pope for Medjugorje.
The press conference, in which Hoser spoke French, "the language of diplomacy", was broadcast by MaryTV.
The archbishop found very well-meaning words for the place. "There is a special, spiritual climate here."

"I think that Medjugorje is already part of the new evangelization. The numbers speak for themselves. The dynamism of the increase of pilgrims shows that the needs are also growing."

Numbers were cited: 610 appeals in countries such as the USA, Italy, Germany, which were aroused in Medjugorje, and 2.5 million pilgrims visiting the Herzegovinian town every year.

"There are other important things, such as the retreat Domus Pacis. In recent years it has been used by more than 1000 groups with over 42,000 participants. These spiritual retreats transform men inwardly," the Archbishop said.

All this "shows the intensity of Christian life in Medjugorje, which can be compared with other places."

Archbishop Hoser was asked whether he considered the alleged Marian publications in Medjugorje to be real or not. The Special Envoy, however, stayed with an opinion. He was not entitled to comment on it.

"It is not my task to discuss whether these phenomena are true or not, because the Church has not yet defined them. This is the work of the Commission of Cardinal Ruini."

This is the international investigation commission set up by Pope Francis in 2010 under the direction of Camillo Cardinal Ruini. This commission listened to all the "seers" with the task of commenting on the issue of authenticity, whether the Mother of God has appeared in Medjugorje since 1981 or not. The Commission ended its work by the end of 2012. With the resignation of Benedict XVI. and the election of Pope Francis, it is at a standstill. In 2014, Cardinal Ruini gave Francis the final report to the Commission and presented its conclusions.
Hoser also expressed the hope that "the ultimate decision of the Commission and of Pope Francis" would soon take place.

"Unfortunately, I can not speak about the material of this Commission, since it has not yet been published. I could speak with Cardinal Ruini, but I can not say anything about it."

The term "apparitions," which Hoser used at the press conference, he uses,"because they are so-described here." But it is not a matter of their inherent value, according to the Archbishop.
The archbishop confirmed that he had "met with the 'seers'" as part of my commission, "but" not to the matter itself, "because that is the task of the Commission of the Doctrine of the Faith by Cardinal Ruini."
According to the "seers", according to Hoser, "the phenomena still persist, which presents difficulties to making a final judgment."
The Archbishop still emphasized the need for clarification. He had climbed the Podbrdo, the so-called "Mount of the Marian Apparitions." He had met a group of Polish pilgrims at the Marian statue established there and talked with them about the piety of the Virgin Mary. "It is not true that I had led the pilgrims there, as some media have claimed."
Text: Giuseppe Nardi
Photo: MaryTV (Screenshot)
Trans: Tancred vekron99@hotmail.com
Link to Katholisches...
AMDG 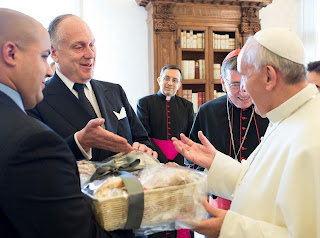 The Polish reactions takes the friendship and closeness to the Pope of Argentine Jews into the public spotlight. With the rabbi of Buenos Aires, the then Archbishop Bergoglio an interview book. The hospitality he gave Jewish organizations, including the Masonic B'nai B'rith,  in Catholic churches, was not without controversy even before his election as Pope in Catholic circles in Argentina. Even as Pope his audiences for Jewish leaders or representatives of Jewish organizations and his messages to the Jewish religion and to the Jewish Community in Rome is recognized this particular area. At a reception for high WJC representatives in June Francis Pope had said: "Because of the common roots  a Christian can not be an anti-Semite." On Monday, he reiterated this statement and added that a Christian to be a "good Christian" who has to understand Jewish history and tradition. [Never mind that most Catholics, even in Buenos Aires, don't know aught about Catholicism.]
In Poland, these statements are now being discussed and partly criticized. Although the intention of the June statement was clear, the choice of words, was yet inappropriate, because what is the name of "anti-Semite" exactly. The Monday Statement is ambiguous, because what was meant by "Jewish history and tradition." Jewish history and tradition of the Old Testament or today? Why must a person, to be a good Christian, know the history and traditions of the Jews after the birth of Christ?
Text: Giuseppe Nardi
Image: traditions catholica
Trans: Tancred vekron99@hotmail.com
AMGD
Posted by Tancred at 6:49 PM 16 comments: