Cardinal Cañizares: "There is a veritable Holocaust ongoing against Christians" and "The powerful are silent"

(Madrid) Cardinal Antonio Cañizares, Archbishop of Valencia and new Deputy President of the Spanish Bishops' Conference issued a "Holocaust" alert for the Christians in the Middle East.
A "Holocaust", according to the Cardinal and former prefect of the Roman Congregation for Divine Worship and the Discipline of the Sacraments, is happening under the eyes of those who "direct the destinies of the peoples". These offer "passivity and silence" against the persecution and extinction of Christians in the Middle East.
Cardinal Cañizares raised his voice in his sermon in the Cathedral of Valencia last Sunday for the protection of persecuted Christians. "Thousands and thousands of Christians are being persecuted today and massacred in a regular and new Holocaust," and under the eyes of the powerful in this world who would be silent and idle.
The Cardinal took advantage of the feast of Saint Joseph, the foster father of Jesus Christ, to draw attention to the fate of Christians in the Middle East. He called on Joseph, who protected the Jesus Child and Mary from the persecutors, as advocates for the protection of the "persecuted, homeless, displaced and fleeing Christians, who endure so much enmity in their homeland."
Text: Giuseppe Nardi
Image: InfoVaticana
Trans: Tancred vekron99@hotmail.com
Link to Katholisches...
AMDG
Posted by Tancred at 3:17 AM 7 comments:

New "Foreign Minister" in the Vatican? --- Continuing Reassignments by the Pope

(Vatican) Pope Francis is preparing for the renovation of the Vatican "foreign ministry". The former "foreign minister" of the Holy See, the French Curial Archbishop Dominique Mamberti  will probably  be dismissed. While the overall reform of the Roman Curia is still written in the stars, Pope Francis is making more heads of Benedict XVI's  Curia roll. A few days ago  the Curial Cardinal Prefect Cañizares, then the secretary of the Congregation for the Clergy, was hit. Another of his Prefects, Cardinal Mauro Piacenza, had to vacate his seat a year ago.
In mid-September,  the C8-Kardinalsrat , formed by Pope Francis as an advisory body for the reform of the Curia and the management of the world Church will meet. In the beginning of July  it's been the fifth meeting of a C9-Council, since  Cardinal Secretary of State Pietro Parolin  then was also added to the C8-Council. A formal act of the membership of the Cardinal Secretary of State in this body, has not yet taken place, as the Vatican expert Sandro Magister mentions.
It will be at the sixth meeting of this committee. The seventh meeting follows from 9-11 December and the eighth meeting on 9-11 February 2015.  The work of the Cardinal Council  still seems to be in the preliminary phase. "There are no designs for a new apostolic constitution," said Vatican spokesman Father Federico Lombardi at the end of the fifth meeting, "It takes time." 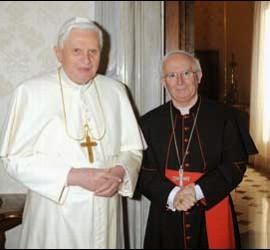 Benedict XVI. and the "Little Ratzinger" Cardinal Antonio Cañizares
The "ruling bishop of Rome" (Sandro Magister)  already related soon after his election  that he did not intend to wait for the reform of the Curia to make personnel decisions.  It had been expected for months when on August 28th, the removal of the Spanish Cardinal Cañizares Llovera of the Roman Curia took place.  Cardinal Cañizares was   Prefect of the Congregation for Divine Worship under Benedict XVI. and became a supporter of the "reform of the liturgical reform". He had a close relationship to the Church understanding of the German Pope, which he shared with Cardinal Mauro Piacenza. Too close for  Pope Francis.  He  "promoted" the "little Ratzinger", as the Cardinal is known for his bodily stature, who is content but not necessarily aptly, called back to his home and named him Archbishop of Valencia, after all, "one of the most vibrant Dioceses of the Iberian Peninsula," says Sandro Magister.

What responsibilities will remain the Congregation for Divine Worship?

Officially, Francis Pope had the transfer not imposed, but only responded to the wishes of the Cardinal to want to accept "the smell of the sheep". Cardinal Cañizares that, if they did, "dear Madrid would have preferred Valencia, is a different story," said Master.
A successor to Prefect Cañizares  of the important Congregation of Divine Worship and the Discipline of the Sacraments has not yet been appointed. For Sandro Magister  it appears as "unlikely" that Pope Francis will seek a "break" with   Benedict XVI. in his choice of successor. Rather it would is much more to be what responsibilities the Pope leaves the Congregation,  transferring them to the Episcopal Conferences, such as responsibility for the review and revision of the liturgical books. 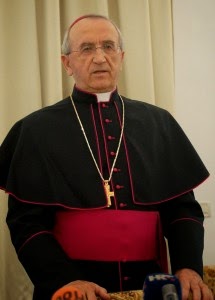 Celso Morga Iruzubieta: Secretary of the Congregation for the Clergy is Coadjutor Archbishop in Spain
According to Spanish media reports, the return of another high prelate to Spain is imminent, who currently holds a leading position in the Roman Curia. It is Curial Archbishop Celso Morga Iruzubieta. The priest of Opus Dei has been since 2010 the Secretary of the Congregation for  Clergy . Now he is to be Coadjutor Archbishop in the Archdiocese of Merida Badajoz in Extremadura.
This completes the repluisti Pope Francis, the "repudiation" of one of the most important offices of the Roman Curia. The Congregation for the Clergy is concerned among other things with  disputes between priests and bishops, with the dispensing of the priestly duties (except the delicta graviora ), with the sale of church property over a certain value. By the will of Benedict XVI.  it was give charge of the seminaries. Above all, it is also about the image of priesthood and thus  the self-image of the priest. The successful prevention of the appointment of the saintly Curé of Ars Patron of Priests, which Benedict XVI. wanted to make, is still vividly remembered.
The removal of the Number Two of the Congregation follows that of the number one, Cardinal Mauro Piacenza, which Pope Francis had already carried out in September 2013. Both were by Pope Benedict XVI. been appointed. Cardinal Piacenza still comes from the Genoese school of Cardinal Giuseppe Siri. On him the diplomat Beniamino Stella followed. For the seminars appointed Francis one additional Assistant Secretary, the Sino-Mexican Curia Archbishop Jorge Carlos Patron Wong. In addition, over the past year such a strong exchange of employees in this Pontifical Council was held that Roman observers speak of an unprecedented precedent.

The new curial organization chart of Pope Francis stands at the edge of another reshuffle. Curial Archbishop Dominique Mamberti, head of the Section for Relations with States in the Secretariat of State and thus "foreign minister" of the Holy See is to be replaced. The reasons for the action are not known. It can at best be speculated about as a change of course in the relations with the states and international bodies.
"It will be interesting to see whether the Pope in this case will follow the unwritten law that the Vatican's 'foreign minister' is awarded  at the end of his service with the dignity of Cardinal," said Sandro Magister. The predecessors Mambertis were  given this honor,  from Giovanni Lajolo, Jean-Louis Tauran, Angelo Sodano, Achille Silvestrini, Agostino Casaroli to Antonio Samore, etc. 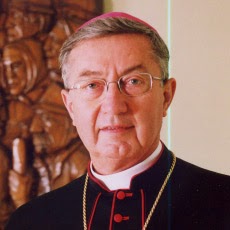 Jean-Louis Bruguès, archivist and Librarian of the Holy Catholic Church, but not Cardinal
Or is Pope Francis denying Mamberti  the cardinal's purple, as he is - in spite of unwritten law - the Archivist and Librarian of Holy Roman Church, rejected Curial Archbishop Jean-Louis Bruguès? The French Dominican Bruguès had, as Secretary of the Congregation for Education (2007-2012), skirmishes with the rector of the Catholic University of Buenos Aires, and was discharged  Victor Manuel Fernández. Fernández is considered a "foster son" of Jorge Mario Bergoglios,  and he was -  just as soon as Bergolio was elected pope - quite unusually, immediately promoted him to  Archbishop, while he avenged  himself on Father Bruguès for his criticism of Fernández.
Pope Francis justifies his appointments  in the Diplomatic Corps of the Vatican on renewal. For this reason, it seems very likely that the successor of Mambertis will come from the ranks of diplomats. It is likely he will also be  valued by Cardinal Secretary of State Parolin nuncio.
With the exception of the two French Archbishops Mamberti and Cardinal Tauran and  Poland's Wlodzimierz Czacki at the end of the 19th century,  all were the "foreign minister" of the Vatican in Italy. Just  as both the Cardinal Secretary of State and his substitute, the Sarde (Sardinian) Curial Archbishop Giovanni Angelo Becciu, come from Italy, it seems unlikely that the third high position in the State Secretariat is to be staffed by an Italian. "Unlikely, but not impossible," said Sandro Magister.
Text: Settimo Cielo / Giuseppe Nardi
image: Settimo Cielo / Wikicommons
Trans: Tancred vekron99@hotmail.com
Link to Katholisches....
AMDC
Posted by Tancred at 4:21 PM 3 comments: