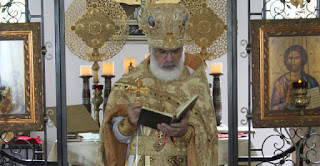 “This news comes from Puerto Rico:June 10, 2017 the Pan Orthodox of St. Spyridon in Trujillo Alto, PR community were received into the Catholic Church as a Greco Catholic Byzantine community under the “Omophorion” (jurisdiction) of the Latin Archbishop, Metropolitan Roberto González, O.F.M.
The welcome ceremony was presided over by the Vicar General of the Archdiocese, father Alberto Figueroa Morales on behalf of the Archbishop. The priests and parishioners made the profession of faith and during the liturgy were commemorated the Supreme Pontiff, Francisco and metropolitan Robert.
This makes the community of San Espiridión the first Eastern Catholic in Puerto Rico community. Welcome to the priests and parishioners of San Espiridión to the Catholic Church. They will continue celebrating the Divine Liturgy and sacred mysteries according to the Byzantine tradition. The continuous liturgy in the Church Slavonic language, English and Spanish… following the liturgical calendar Julian (old calendar).
Link...
AMDG
Posted by Tancred at 9:25 PM 55 comments: