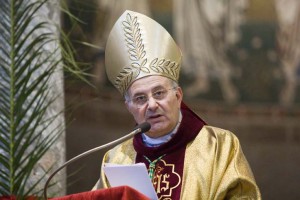 Archbishop Crepaldi: attack on marriage and the family a kind of suicide of humanity
(Trieste) The attacks on marriage and the family are a kind of "suicide of humanity" warned Archbishop Giampaolo Crepaldi of Trieste. Archbishop Crepaldi is one of the competitive profile Catholic pastors, which is why he stands out among his brethren.
Last Sunday he preached at the Marian shrine Monte Grisa at Trieste. The archbishop celebrated Holy Mass, prayed at  the conclusion of the Marian Month of May  with the faithful the rosary and concluded the Peregrinatio Mariae. The Peregrinatio is the pilgrimage of the miraculous image of the Virgin Mary which is venerated in the church of Santa Maria Maggiore in Trieste, and in all deaneries of the Archdiocese.
In his sermon Archbishop Crepaldi spoke about the defense of the family, which is "an inviolable borderline for the future of humanity. The attacks on marriage as a covenant between a man and a woman were described by the archbishop as a "suicide of humanity".  What the Archbishop said:
"Dear brothers and sisters, in this devotional celebration to conclude the Peregrinatio Mariae let us pray to the Mother of God for the family. Today the defense of the family and the marriage covenant is more than ever an inviolable borderline for the future of humanity because the attacks on marriage as a covenant between a man and a woman are a kind of suicide of humanity, especially in our western countries. From a Christian perspective, it is wrong to assert that the fundamental relationship between man and woman is merely a cultural or social product, a 'gift' from any government or a human construct. Children are not the product of the society or the state. Governments can not displace the primary responsibility of parents for their children, nor deny child the right to grow up with his mother and the father. In Christ, the natural state of marriage, is the natural union between a man and a woman in the marriage  sacrament, a sign and instrument of His grace and his own relationship with the Church. This grace is an action of mercy, it is the seal of the conjugal covenant. It is something that you can believe with secure confidence, a gift that must be preserved. The indissolubility of marriage is a grace, not a problem for which you have to look for exceptions. "
Archbishop Crepaldi warned that the attacks on marriage and family life will lead to the suicide of humanity. Just last week, Cardinal Secretary of State Pietro Parolin had described  the approval by the electorate of Ireland for the legalization of "gay marriage"  as a "defeat for humanity".
Text: Giuseppe Nardi
image: Vita Nuova Trieste (Screenshot)
Trans: Tancred verkon99@hotmail.com
Link to Katholisches...
AMDG
Posted by Tancred at 12:45 PM 1 comment:

It was an issue of the homosexual movement, to explain "homophobia" as a crime. Representatives of the traditional family could expect persecution if they "reject gay marriage" which is feared by the Archbishop of Trieste.

Trieste (kath.net / CWN / jg) The Archbishop of Trieste fears that the homosexual movement is trying to criminalize all who oppose their concerns. The group "Arcigay" demonstrated on 12 January against the bishop. They accused him of being intolerant and racist. Demonstrators had even prevented him from leaving his residence, says the Archbishop. [I hope he plans on taking photographs and having miscreants arrested]

The activists wanted to implement "aberromarriage" and those who were against it, they accused them of "homophobia," said the Archbishop. Their goal is to make "homophobia" into crime. This is a threat to freedom of expression. Who - as the Catholic Church - represents the view of the family founded on the marriage of a man and a woman, would then be prosecuted feared Crepaldi.
Link to kath.net....

Secessionist Movement in Trieste Recalls its Place in Habsburg Monarchy


Edit: It looks like the city of Trieste prefers Habsburg Monarchs to the Republican government of Italy. We received this declaration from the e-mail:

On Sunday morning of the 15th of December, before the court, many citizens of Trieste will declare the renunciation their Italian citizenship.

We, the people, want to reestablish full sovereignty for the Free State of Trieste. This movement was born in the serious difficulties faced by the city itself, for its region and for all of Europe. The past annexation was accomplished outside of the legality of civil law, in local as well as international standards: The peace settlement with Italy in 1947 in Paris which was singed and continues in force -- continues to be systematically ignored.

We, the people, we are the citizens of the Free Territorium of Free Trieste and intend, therefore to live legally in a state of individual and collective well being.

The Free Territorium of Trieste is, is by definition, multicultural and multi-lingual and understands its historical and geographical place in Middle Europe.

We are establishing ourselves for the Internationalization of the economy of our region and, the impulse of our place for many years in the Habsburg Monarchy, we advocate our continuation and the broadening of the mental openness of our population for other languages and cultures.

The free harbor of Trieste, the most important motor for our economy, can not be excluded or prepared for the settlement of real investments, without producing the previous legality.

So soon as these will be returned, we want to make good the progressive progress of innovation, to promote the foreseeable industrial developments and the settlement which today's reputation of stagnation of technology and is born according to the preservation of the environment. Trieste has suffered through the complicity of all administrations, which in the past decades have been a caused a nuisance in our area, and its hinterland are today under morbid debts of a no longer bearable environmental strain.

It hasn't bypassed us, how the Italian State counteracted a concourse and are in the clear, that whose causes do not lay in Trieste and that whose consequences are detected in Trieste's part is to be seen traces by reason of its progressively illegal status of the current administrative power.

By reason of this gripping economic decline the current administration is above all not in a position, for our existential important reforms -- to accomplish it as an attenuation of the tax burden.

While Europe puzzles over the causes and the solutions of the current crisis, our movement aims then to improve the quality of life in our region palpably, to closely oversee the conduct of human rights conventions and to implement the rights of self-determination of the people in fact.

"Free Trieste" represents the living interests of the overpowering majority of the population in their tributary areas and asserts therefore, the political, legal, economic and tax rules of the Peace Agreement in effect its legal path. Thus, on that it follows the reestablishment of its legality is our highest objective.

We, the people, want therefore, want to reestablish the complete sovereignty of the Free State of Trieste.
info@volontaritrieste.eu