A Catholic President in Finnland?

There will be no support expected from the modern hirling-Bishops. 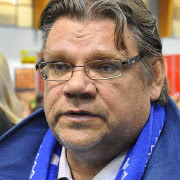 (kreuz.net) Last Sunday the party "True Finns" chose their founder and President Timo Soini (49) to run for the office of State President.

The State President will be chosen in two votes directly by the people --- on 22. January und am 5. February 2012.

The People Trust Him

Soini is a practicing Catholic. He sits at the moment for his party in Parliament.

As a true son of his Church, he is a clear opponent of the criminal violence of abortion and the unjust privilege of those who are homosexually disturbed.

For years he has been a sharp critic of the EU-Bureaucracy.

For that reason Soini has won in the polls many times, from which it arises that the Finnish people trust him for the most part.

Soini is married and has two children.

Where does the Bishop of Helsinki stand?

As the candidate of the formerly conservative and presently homosexual and abortion "Kansallinen Kokoomus", Sauli Niinistö (63) will step forward.

At the same time candidates have been nominated for the divorced socialist, Comrade Paavo Lipponen (70), of the SDP and the homosexual ‘Green’-extremist, Comrade Pekka Haavisto (53).

The Old Liberal scandal-Bishop Teemu Sippo SCJ of Helsinki is deemed to be the personal friend and indirect supporter of the divorced Socialist.