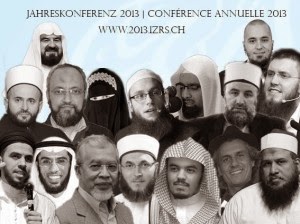 (Bern) Switzerland too, the model country of the peaceful coexistence of different ethnic groups and compensation of indigenous ethnic group of successful compensation has a problem with mass immigration: Islamism. The Islamist agitation is particularly serious for Switzerland, as the Confederates  have tried to practice strict neutrality for 200 years. But Islamists have little consideration, not for European borders, customs and sensitivities. This forces the Swiss government  to increased vigilance. Keeping tabs  mainly on Islamist circles in the canton of Basel.
The industrial center of the  Swiss Confederation has experienced in recent years a significant influx of Muslims.  As the Basler Zeitung reported in its current edition, the imam of the Arrahma Mosque on Mühlhauserstraße is an Islamist point of contact. As the Federal Intelligence Service (FIS), the Swiss State Treasury Department, that  the Imam has equated  Christians with animals.

The same Islam, which calls  “jihad”, for "Holy War” in Basel, wants to be  a “National Church” Switzerland like the Reformed and the Catholic Church.   And he can count on support numerous self-proclaimed Islamic understanders in Switzerland.
Recently in Switzerland   two Kurds from Iraq were brought to justice. A 35-year-old welfare recipient and her younger brother. Both are accused of belonging to Al-Qaeda terror network. They had pitched their tents in Basel. There they would, according to the indictment, direct the "foreign department” of the Didi New Center.  For the prosecution hiding behind the innocuous sounding name base of the international network of Islamist terrorism. The Swiss Intelligence views the Oslo resident  Mullah Krekar as  the head of a "criminal" organization.

Other features of the Didi Nwe Center included the provision of "safe" chat rooms, so that Islamists were able to communicate with each other undisturbed. This included an online Sharia Academy . The Swiss Federal Prosecutor is certain to have collected sufficient evidence to be able to demonstrate that the Internet platform of Didi Nwe Center was used to disseminate messages, propaganda and information from Al-Qaeda.
Basel has a large Muslim, especially Turkish, community and is “very auspiciously”  established in the tri-border region. This allows the liberty of quick crossing of the borders between Switzerland, Germany and France in any direction. Especially with Germany’s too prominent Turkish community, facilitates the contacts.  Basel had "obviously a central function with a certain appeal,”  the press spokesman for FIS told the Federal Intelligence Service.

The state security services monitors Islamic activities  in Basel. In December 2013 hate sermons against unbelievers, especially Christians and Jews were given in the Faysal Mosque. In November, at an information network of the Islamic Central Switzerland called (ICCS) in Basel for the killing of Jews and Christians. The ICCS distributed two different versions of the Quran. To Muslims, the version is distributed with the call for killing, however, they are missing in the German version.
The Swiss and the German Federal Intelligence Service already observed the Basler Said-i Nursi-Mosque in Kleinhueningen together. There are members which apparently include  a Middle Eastern Islamist militia from several European countries, which is classified as a terrorist organization. The head of the mosque is considered number three in the network that wants to impose by force of arms an Islamist state in Turkey.
The Islamist activities in and around Basel show that the Rhine town is an important place in the coordinate system of the Islamists in Europe. The Swiss security authorities are of the opinion that the trouble - at the price of increasing complexity - is  so far   under control. How long this will be the cease, however, no one can say.
Text: Giuseppe Nardi
image: ICCS (screenshot)
Trans: Tancred vekron99@hotmail.com
Link to katholisches…
AMGD

Email ThisBlogThis!Share to TwitterShare to FacebookShare to Pinterest
Labels: Bern, Islam, Switzerland, The Religion of Peace

The Turkish Parliament Discusses Turning Hagia Sophia into a Mosque 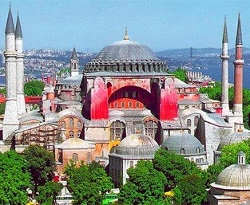 (Ankara) The Islamization of Turkey through symbolic interference continues.  In the Turkish Parliament a debate has begun over a proposal regarding Hagia Sophia in Istanbul, of old Constantinople, to turn it into a mosque.  The proposal was proposed by Talip Bozkurt, a citizen of Kahramanmaras in Anatolia. The Hagia Sophia, the largest and most glorious Basilica in the East, was used for 916 years as a church, till the sack of Constantinople by the Turks in 1453, when it was transformed into a mosque.  The typical Christian building style of the church is still unalterably visible.  In any event the church was accompanied by four minarets and the cross on the main dome was replaced by a half moon, to indicate Islamic occupation.

Since 1935, since the national Turkish government of Kemal Ataturk, the church was not a mosque, but a museum.  It counts today as the most visited museum in the world.  In its current form the church, erected in the 6th century is a magnet for people interested in art and culture.

The current petition committee of the Turkish Parliaments took the petition and seeks various organizations and institutions for a statement.  Various Islamic organizations, above all from Anatolia, are speaking out for the transformation to a mosque.  An Anatolian-Islamic youth organization is driving a campaign for it.

The application had been submitted, according to a decision of Prime Minister Recep Erdogan about another Christian church, called to transform the Hagia Sophia of Nicea again into a mosque, which had also been converted to a mosque after Ottoman conquest under Islamic rule and made a museum again under Attaturk. The Council of Nicea was held in the 1,700 year old Basilica in 787, where the Christians of East and West were united for the last time.  From 1331 to 1920 the church had been made into a mosque by the Rum Seljuks.  The Deputy Prime Minister of Turkey, Bulent Arinc says that to convert the Nicene Hagia Sophia into a mosque: "In this act we have recovered the recognition of our ancestors.  Hagia Sophia of Iznik was booty of our conquest and as such we have a right to it.  A church can be converted into a mosque".

Bulent Arinc was also Erdogan's henchman, in the summer of 2012 in Trabzon, where another famous church of the same name on the Black Sea was again converted into a mosque, having previously suffered the same fate as the other two basilicas which were transformed into museums. The Hagia Sophia of Trebizond, whose model was the famous Constantinople, was built in its present form in the 13th century.  It served as the last of the three churches under Turkish dominance.  1511 led to its profanation and transformation into a mosque.  From 1916 the Christians of the Black Sea were victims of an anti-Christian genocide, which at the same time was aimed at the Christian Armenians as against the Georgians and the Greeks.

"The Turkish Government is making one step forwards and a step backwards in its dialog with minorities",  commented the Ecumenical Patriarch Bartholomeus I in 2012 on the difficult situation of Christians in Turkey.

Link to katholisches...
Posted by Tancred at 4:38 PM 4 comments:

Edit: Who would do such a thing?

Email ThisBlogThis!Share to TwitterShare to FacebookShare to Pinterest
Labels: The Religion of Peace
Older Posts Home
Subscribe to: Posts (Atom)