Mass Setting for the Transference of the House of Loreto 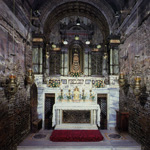 [Pius.info, Germany] On the 10th of December the Church celebrates the transference of the House of Loreto.   Pius.info has found the Mass setting:

According to God's resolve the Holy Home of Mary in Nazareth, in which she herself was born in and in which she received the message of the Archangel Gabriel of the Son of God becoming man, was transferred, so that destruction would not befall it.

Born by an angel's hand, it came on the 10th of May in 1291 to Tersato near Rijeka in Dalmatia, where it remained three years and seven months.  On the 10th of December 1294 it was brought by the service of an angel of God in the area of what is today,  Loreto. The tradition of the miracle of the transfer of the Holy House is testified by old documents, by investigations of the past as also through such in more recent and the most recent time, through the statements of Saints and mystically gifted persons and through the prolific miracles which have happened there.

Many Popes have spoken in favor of Loreto, not a few of them have visited Loreto.  The feast of Mary's birth (8 September) is celebrated yearly as its main festival, and the feast of the moving of the Holy House is celebrated on the 10th of December. --

The Mass text addresses the great Holiness of this place (Introitus etc.),  including the birth of the Most Holy Virgin (Reading), on the Incarnation of God (Evangelium) and on the miraculous moving of the Holy House to the former Land of the Popes, the Church State.


Link to Mass settings for the Feast...

Posted by Tancred at 4:37 AM No comments: