No Place for Tradition -- Not Even on the "Margins"

(Rome) In a "Church on the margins" there is a place for many, but apparently no place for tradition, at least not in the Abruzzo, Italy. There rules Bishop Michele Seccia,  who is considered as an example of a clerical turncoat in Italy. Appointed by Benedict XVI. as  bishop and placed at the top of the Diocese of Teramo-Atri, he applied himself to follow the Pope in matters motu proprio Summorum Pontificum.  Enter Pope Francis, the same applies, but in the exact opposite direction.
The situation of the traditional believer in the diocese is dramatic (see At the "Margins of the Church" - of Traditional Rite: Situation report from Abruzzo ). As Pope Benedict XVI. enacted the motu proprio Summorum Pontificum,  Bishop Seccia called the Franciscan Friars of the Immaculate to Teramo. They took over the abandoned Dominican monastery and managed the Church of San Domenico, bringing  a growing number of believers to the traditional rite. But along with the tradition, the Franciscan Friars of the Immaculate fell into disgrace after the election of Pope Francis to the highest ecclesiastical office. 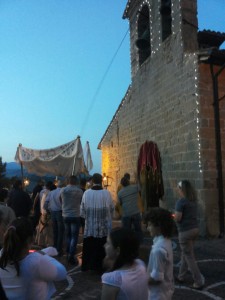 Empty Churches but no Place for the Traditional Rite

Since then, Coetus has engaged in protracted negotiations with the bishop, to find admission to another church in the city, or to the opening of the Church of San Domenico, at least for the celebration of the Mass by Don Gaston on Sundays and public holidays.
Although the city's churches are empty,  no priest of the city showed pity on them and offered hospitality in his parish. Although the bishop took part in the celebration on a grand scale opening of the "center" of a different religion, he showed no mercy to the faithful in the traditional rite and offered them, despite many empty promises, hints and promises of any of the numerous, partly unused churches in the city.

The Wandering to the Margins - The Exile in the Mountains 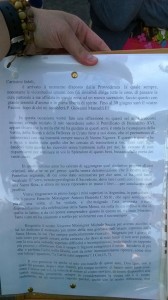 Farewell letter from Don Gaston to the Faithful
The Argentine military chaplain Don Gaston Munoz Meritello could finally find a replacement. In the parish 25 km distant from Teramo  where he worked as a chaplain, he received permission to use the  remote chapel. There he had since celebrated then for the faithful who attended the Mass from the city of Teramo and the whole area in the traditional Rite. Although the chapel is tiny, it lit up this remote place with all the splendors of the Sacred Liturgy in honor of God and a blessing to the faithful and the entire Church. This felt as though the Congregation of Religious and  their own bishop had driven them to the underground, but they were glad to be back to have a Mass location.
With the transfer of Don Gaston Munoz Meritello to the mountain parish of Faieto, the old Mass community had to return to wandering, this time in the mountains. The path to the "margins of the church", not a virtual, but a quite literally has continued to  take them to the margins. In the mountainous region, a single priest is in charge of seven parishes. The parishes are very small, but are far apart. A relief for Don Gaston was therefore welcome. Don Gaston was in the Parish Church of St. Andrew of Faieto celebrating Holy Mass in the traditional rite. Faieto is located 630 meters above sea level and has a population of 90 inhabitants. A more remote location could hardly be found in the Diocese of Teramo-Atri.
The faithful began with Don Gaston at their own expense, to beautify the mountain church   and to make a number of liturgical purchases. But even this exile did not last long. Bishop Seccia has ended now without prior cooperation with Don Gaston Munoz Meritello. Reasons were not disclosed. Since he was only "borrowed", Don Gaston must therefore leave the Diocese of Teramo-Atri. His next mission will be decided by the Argentine Military Ordinariate.

The Ruthlessness of the "New Mercy"

For new pastor of Faieto  Bishop Seccia has appointed Father Giovanni Maria Manelli of the Franciscans of the Immaculate. As the family name suggests, he is a relative of the Order's founder, Father Stefano Maria Manelli. Father Manelli is indeed to take over the remote mountain parish, but is limited by the prohibition he is not to be allowed to celebrate the traditional rite the Holy Mass.
The faithful are once again on the road, driven by those who should be their shepherds. For them, it seems in the "New Mercy" has left no room at the inn, not even in the Church.
Text: Giuseppe Nardi
Image: Messa in Latino
Trans: Tancred vekron99@hotmail.com
Link to Katholisches...
AMDG
Posted by Tancred at 11:46 AM 6 comments: