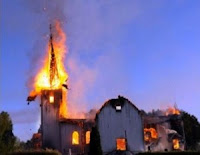 (Doboma) Hundreds of Muslim separatists burned two churches in Zansibar to the ground.  The group of islands around the main island of Zansibar  with more than a million inhabitants belongs to Tanzania. The inhabitants of the autonomous island group are 98% Muslim.  This was reported by Reuters.


On the mainland, however, while the coastal region is predominantly Muslim, but the interior is predominantly Christian. In addition there is an ever-shrinking group of followers of indigenous religions. The number of Christians, mainly Catholics is estimated with more than 45 percent. The Muslims are supposed to be around 40 percent. Exact details are not known. Since the independence of the East African state in 1964, the religion of the state is not applicable because the question is considered too explosive for the cohesion of the state. In the wake of decolonization, the mainland territory of Tanganyika and the island group on the new state of Tanzania was united.

Muslim separatists demanding independence of Zanzibar and fight simultaneously for the Islamization of which is directed against the tiny Christian minority, which makes up just one percent of the population.

In the night from Saturday to Sunday the separatist group UAMSHO (Association for the Mobilization and Proliferation of Islam) burned down two Christian churches. This led to open clashes with the Tanzanian police. A church was burned down completely. The second was saved by the prompt intervention of the security service from utter destruction.

The UAMSHO calls for a referendum on the withdrawal of Zanzibar in Tanzania. For 2014, the East African country is scheduled to receive a new constitution. The UAMSHO will use this opportunity to lead the archipelago before the new Constitution to independence.
Link to katholisches...