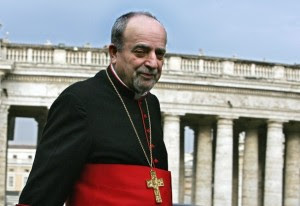 Just before the dawn of Easter, Ignace Moussa I Cardinal Daoud passed away in Rome, aged 81, early this morning. Cardinal Daoud was the former highest prelate of the Syrian Catholic Church and had retired from his official functions in 2007.

Born in 1930 in Syria as Basile Moussa Daoud, the future cardinal was ordained a priest in 1954 and went on to study canon law at the Pontifical Lateran University in Rome. In 1977, he became the Syrian Bishop of Cairo, a position he held until 1994, when he became the archbishop of Homs in Syria. Over the course of October of 1998, he was elected, confirmed and enthroned as Patriarch of Antioch of the Syrians, and he took the name Ignace as his first name, a tradition for Syrian patriarchs.

After some two years, Patriarch Daoud was called to Rome as Prefect of the Congregation for the Oriental Churches, but kept the title of Patriarch ad personam. Shortly afterwards, in the consistory of 21 February 2001, he was created a cardinal, but did not receive a title church, since he was a prelate of an eastern Catholic Church.

His visit was marked by a parade of Palestinian Scouts and Girl Guides' Organization on the streets of Bethlehem. The Holy Mass was presided by His Beatitude Mar Ighnatios Youssef III Younan at the Syrian Catholic church in Manger Street.

In a talk sponsored by "Save the Monasteries" foundation, Archbishop Archbishop Al-Jamil, procurator of the Syrian-Catholic Patriarchate in Rome has given a talk about the perils and plights facing Catholics in Iraq who, despite having made significant contributions to Iraqi society in the past are now in danger of disappearing from the country entirely if the situation of current Muslim hostility is not addressed. Before the war, Christians were highly respected and considered an integral part of Iraq, but things have changed.

Link to article in Zenit...


Earlier discussion where Archbishop Al-Jamil addresses the question in 2007, link...

An independent Kurdistan...article.
Posted by Tancred at 9:19 AM No comments:

Mosaic at the Convent of St. John, Earliest Monastery in Syria

The Syriac Church of al-Nabghi Landmark. This Syriac piece is what remains of a mosaic of beautiful grounds with trees from the early fifth century. The earliest date ever recorded of a Syriac Christian monument was unearthed in February 2007 in the village of al-Nabghi near Aleppo in northern Syria. The inscription commemorates the creation of a mosaic floor laid in the chapel of the martyrs of a convent dedicated to St. John (probably the Baptist). The text began with the date, unfortunately damaged, but it is possible, according to Francoise Briquel Chantonnet and Alain Desmreumaux (CNRS), reading 718, in use at the time of the Seleucid era, ie., around 406-407 AD. It was then the oldest archaeological evidence of the existence of a monastery in northern Syria. It is also and example of archaic Syriac, the Aramaic of the Edessa region (south of present-day Turkey), which was and is still today the liturgical language of Syriac, still living in the Middle East.