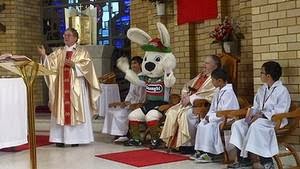 Horrors: Father Jersey and Charlie the Rabbit lead the congregation in a rendition of the South Sydney victory song at the St Michael's Daceyville feast day Mass on Michaelmas.
The South Sydney Rabbitohs are a team in this competition.
Here is a link to the article in which the photo originally appeared:
http://www.smh.com.au/sport/oconnors-troubles-sign-of-deeper-issues-20130919-2u2hl.html#ixzz2fOVHEcyh
Posted by Tancred at 1:25 PM No comments:

Cardinal Pell Joins the Chorus of Apologizers: Do Penance!

When saying you're sorry just isn't enough, you get the impression that there hasn't been a tangible amends or reparation. That's why for centuries, Holy Mother the Church has employed Penance. The Irish Bishops said they were going to engage in some serious penance during Lent this year. Haven't heard anything about that.

Penance should be painful, especially for Bishops who've fallen down in their responsibilities as Cardinal Pell has. Check out the scene of the King of England being whipped in public as penance for his wickedness @2:60. Bishops should consider something like this both for themselves and their subordinates, because many people simply don't believe the apologies for past Crusades and all that:

[The Syndey Morning Herald] AUSTRALIA'S leading Catholic, Cardinal George Pell, has decided to throw his weight behind the historic apology to victims of sexual abuse issued at the weekend by Archbishop Denis Hart of Melbourne.

In a statement yesterday Cardinal Pell, the Archbishop of Sydney, said he ''wholeheartedly endorsed'' Archbishop Hart's letter of apology which went to 219 parishes in Victoria, saying the letter ''speaks for me, too''.

In the letter Archbishop Hart spoke of a ''crisis of faith'' and acknowledged that victims of clergy abuse had been betrayed, while the church had not always responded properly.