Non Audiatur et Altera Pars: Pope Francis and the Franciscans of the Immaculate

(Rome) The official news agency of the Catholic Church in Germany (CBA) and Switzerland (KIPA) have entitled the following stories:  "Pope  Insists on New Mass for Franciscans of Immaculata" and "Pope Insists on New Mass."  It is further stated in the reports, "Pope Francis has  rapped the Franciscans of the Immaculata over  decisions of the Second Vatican Council (1962-1965) and the subsequently developed New Mass."   The pope "warned against departing from  the provisions of Pope Benedict XVI., who had opened up the celebration of the Tridentine Mass again  with a motu proprio of 2007  under certain conditions."
Apart from the peculiar admission that a new Mass form was "developed" that after the Council, the reports are based on the hoax, that the Franciscans of the Immaculate had deviated from "requirements" of the Motu Proprio Summorum Pontificum of Pope Benedict XVI.  and thus forged a special path, which had made the intervention of Rome necessary. The Franciscans of the Immaculate were pastorally speaking a perfect bi-ritual Order. Therefore, they were entrusted with the care of parishes and places of pilgrimage not only in Italy. The reports confirm, however, that it is actually the Old Rite, which allowed the Congregation of Religious to  go berserk against the young order with the approval of the Pope.
Pope Francis remarked with a raised index finger several times directly or indirectly against traditional Catholics with the accusation of "ideologically" motivated action. However, the case of the Franciscans of the Immaculate however, calls into question   question just who is "ideologically"  motivated. The traditional site Corrispondenza Romana published a revealing background report on the papal audience, we document here. The intertitles are from the editorial staff.
.

The "Party" Commissar Volpi in Audience with the Pope 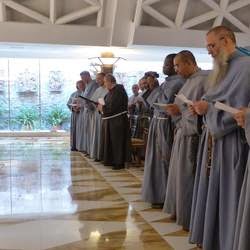 Pope Francis meets Franciscans of the Immaculate Conception, but a Audiatur et altera pars looks different
The meeting of the Pope with the young students (and it was a smaller number of young people) of the Franciscans of the Immaculate Conception took place on the morning of last June 10 in the chapel of Santa Marta.  The message was only on published on the 23rd of June with an article by Andrea Tornielli and from some photos posted on Facebook, while the Vatican media ignored it completely. Why was the announcement  made only 13 days later? There are numerous doubts around the source, which only become thicker the closer one looks.

Meticulously Selected Participants, Who did not Know Who They Were Meeting

The participants in the private audience with the Holy Father were meticulously selected, as it were hand-picked, but without knowing until the day itself, where they were to go. Only after they were directed towards St. Peter's, were they informed that they would meet the Pope. It was said they were making a pilgrimage to St. Peter's, others wanted to know that there was a special meeting with the Commissioner. But almost none of the brothers cited   (the novices, the remaining seminarians and some led by the rebellious priests and the leading professed) knew where you really went this morning.
Surprise: After a few minutes of waiting they stood before the Holy Father. Shortly before, the  master of ceremonies and actual architect of the meeting, Father Angelo Maria Gaeta 1 , with the Commissioner, gave directions on how  behave in the presence of the Pope: no spontaneous questions, obedient listening,  at the end of a quick kiss on the hand without stopping. The Pope was very busy. The day before, he had canceled his audience due to illness.
Read more »
Posted by Tancred at 9:31 PM 15 comments: