Cardinal Schönborn: There Will Be "Signs and Wonders" From the Pope --- "Frightening": Governments Equip Themselves Against Their Own People 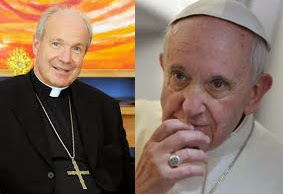 (Vienna) Vienna Archbishop Christoph Cardinal Schönborn is "convinced" that if Pope Francis maintains his "pace" that there would be "changes". This was reported by the Rheinische Post in its Tuesday edition. There will be more "signs and wonders" by the current pope.  The Cardinal considers it "frightening" that the Western governments in their defense and military strategies are oriented more and more "inward" against their own people.

"Reforms" of Remarried Divorcees and Against Celibacy ("Maybe")

"Reforms", the magical magic word was actively worked from Vienna's archbishop in this interview. "Changes" and "pace of change" would also  be the "hot potatoes" like the approval of remarried divorcees to Communion and the abolition of priestly celibacy, says the Cardinal. With the only restriction of the little word "perhaps". Schönborn, is so certain of the papal reforms that he spoke of "signs and wonders" that will be  "done" by Pope Francis.

Choice of Francis "Demonstration" for the Cardinals: "The Horizon Must Expand"

The reigning Pope for the last 17 months from Argentina knows "no  prohibitions of discussions," said the chairman of the Austrian Bishops' Conference . But the Pope was concentrating less on "hot potatoes", but mainly on a "Church of the poor for the poor". With the election of Pope Francis  the Cardinals  had wanted to "also demonstrate": "We need to expand our horizons." So far the  Austrian cardinal  has only attributed the election of Jorge Mario Bergoglio as the Catholic Church's leader to the "supernatural character" of the Holy Spirit.
The Pope, says Cardinal Schönborn, is "more prophet than a revolutionary", so he'll make be more concerned about  "sensation and restlessness": "Francis must and will remain authentic"
The reform program of the Pope is "ultimately" modeled on  St. Francis copied : The general aim was "to put the gospel in the first place" and to make the Church "more Jesus". The "difficulty" is the discernment of spirits, because "who proclaim the gospel, are ready for the reform, or who resist reforms."

In the interview, the Cardinal contradicted the Chairman of the Council of the Evangelical Church in Germany, Nikolaus Schneider, who had spoken in favor of euthanasia.  Cardinal Schönborn said: "There can be no debate about the absolute no to euthanasia." The Church will never give Her consent. The cardinal reminded here of the word of his pre-predecessor Franz Cardinal König, according to which man should "die holding the hand, but not by the hand of man."

The statement by Pope Francis in his Apostolic Letter  Evangelii gaudium  : "This kills the economy. 'A real find' for Vienna's archbishop, expressly  was "not" based on the social market economy, which was influential in the post-war period for the Federal Republic of Germany and Austria. The papal statement was directed against "capitalism and the blatant injustices, which brings the liberal turbo-capitalism with it". The economy stands before a "crossroads", as Pope John Paul II. in his social encyclical in 1991, Laborem exercens had anticipated.

"Concern" for Governments Equipping Against Their Own People

Finally, Cardinal Schönborn warned of negative developments in the western states: "Not enough" is spoken about the fact that the military and defense strategies are increasingly "directed inwards, with a view to possible uprisings in their own countries." This development is "appalling" and the whole drama illustrative of the present situation, because one, the Cardinal does not say who, is preparing to "face a growing discontent among the population." The Church has "only to remember in this situation that there is still time to repent."
Text: Giuseppe Nardi
image: MiL / Cosa resta del giorno
Trans: Tancred vekron99@hotmail.com
Link to Katholisches...
AMGD

Canonization of John Paul II in October of 2013?

Warsaw (kath.net/KNA)  In Poland there is speculation about a coming canonization of Pope John Paul II (1978-2005).  The Polish Catholic News Agency KAI reported  on a possible date in October of 2013 this Thursday.  The source for the unconfirmed information is not named.

In order for the canonization to come, Pope Benedict XVI. must recognize another intercession, it says. It must follow after the beatification of 1 May 2011.  On the 16th of October 2013 will be the 35th anniversary of Karol Wojtyla's election as head of the Catholic Church.

Professor Dariusz Kowalczyk of the Papal University of the Gregorian in Rome has told Polish broadcaster TVP, that it is "very probable" that the canonization will take place in October for the conclusion of the "Year of Faith".  The broadcaster speculates on the date of 20 October 2013.  In Poland, there is great eagerness for a quick canonization of Pope John Paul II.  Initially, the country's media had expected it for 2015 at the earliest.

The canonization process of John Paul II has been the shortest of modern Church history.  The Vatican is testing currently several reports of unexplained healings, which are attributed to the intercession of John Paul II.  The postulator of the canonization, Slawomir Oder, said in May that in three of the four cases had first attempted medicinal examination.  Preliminary to the beatification process, the healing of a French nun in June of 2005 was recognized as a miracle.

The canonization is a solemn declaration by the Pope about the exemplary Christian life of a person and over his final acceptance by God.  After the canonization, which will be completed during a solemn liturgy, the person concerned will be honored worldwide.

Will the Pope's Private Secretary be Promoted Soon?

Rome -- There is Italian media speculation, that Msgr. Georg Ganswein (56) as Prefect of the Papal Household is immediately in the offing.

This would mean that Ganswein will probably give up his job for almost 8 years as Privat Secretary of Pope Benedict XVI, while he will be raised to the rank of Bishop and a person of close trust to the Holy Fathers.  The press office of the Holy See has denied that the time is ripe for such a decision to take place.

Most personal speculations in the wake of the Vatileaks Affair had shown themselves to be weak.

Source...Bild.de
Posted by Tancred at 6:56 PM No comments: