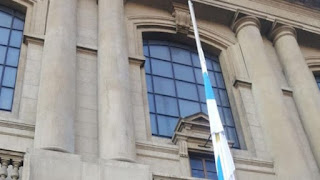 (Santiago de Chile) At the Catholic University of Chile the flag was lowered to half-mast because of the legalization of abortion.
Rector Ignacio Sanchez declared that the day when the law on the decriminalization of the killing of unborn children "will be remembered with grief for many years."
Last Thursday, at the Pontifical Catholic University of Chile lowered the University's flag to half-mast to mark this grief over the legalization of abortion in three cases.
Since 14 September, Chile has ceased to be one of the countries where the life of unborn children is unconditionally protected. State President Michelle Bachelet announced on this day that the law is in force, which allows the killing of the unborn child at the risk of a mother's life, in the case of malformation of the fetus and rape.
According to the daily newspaper El Mercurio, the rector of the Catholic University of the country declared that the entry into force of the law was "a sad day for the university". This is also expressed by the flag at half-mast.
"Our university does not regard this law as progress in our country," says Sanchez. At the same time, he announced that there would be "no abortions" at the university hospital and the hospitals connected with the university. "We stand for the right to life from birth to natural death."
In this sense, the university and its institutions "will always work for the unborn life as well as the mother".
As the law came into effect, a prayer vigil for the unborn children took place before the episcopal residence of Villarica. "We want to show our support for the unborn children to our country. We also testify to our refusal to comply with this law and the will to fight until this law will be abolished," said Francisco Javier Stegmeier, Bishop of Villarica, according to a press release from the Chilean Episcopal Conference.
The Socialist Michelle Bachelet, who has been in office since March 2014, has been leading the fight for "homosexual marriage," the adoption of minors by aberrosexuals and abortion in Chile since 2015.  Nevertheless, the Chilean President will be present as a speaker at the Vatican on 2 November.  Bachelet will be lecturing on climate change during a meeting chaired by  Marcelo Sanchez Sorondo  who heads Pope Francis' political arm in the Pontifical Academy of Sciences.
Text: Giuseppe Nardi
Photo: InfoVatican
Trans: Tancred vekron99@hotmail.com
AMDG