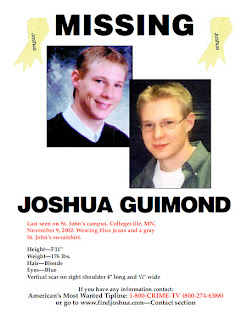 Edit:  they've lied in the past, they will lie in the future.  The University and the Abbey have built an affluent, social worker's paradise, why would they be held accountable for anything?

One of the saddest things we ever heard is how Josh's father lingered around the campus for months looking for his son, listened to conversations, and any hint of what happened to his him.   He feels the School administration withheld evidence from him. In fact, they actually filed a restraining order to keep him off campus.

Considering the fact that Collegeville has long upheld a pretense of Catholicism and been a nexus of Liturgical abuse, doctrinal dissent, disobedience, homosexual activism,  radical and frankly seditious attitudes toward the United States, it's pretty well within the realm of the possible that they could also be responsible for the disappearance of a young man.

When family members wanted to have a march to recall Josh's memory, these Collegeville frauds wouldn't allow it to take place because in their words:

“would not be productive, and that the speculation and conjecture likely generated by such a march could in the end be more harmful to the efforts to find Josh.”

Speculation is legitimate because St. John's Abbey houses at least eleven credibly accused homosexual predators who, despite the Abbot's insistence that they are "on restriction", travel all over the world and enjoy the lifestyle of unmarried, affluent, single males.

At present, one monk who died under suspicious circumstances fits a profile by law enforcement.  His name is Father Bruce Wollmering.  The Sheriff's file related to what was found on Wollmering's computer and in his effects is sealed. As Pine Curtain reports:


It would be interesting to know if Josh had Wollmering for a class or had visited him for counseling.   There also seems to be a connection with Josh's disappearance and the disappearances of many young men like him throughout the Midwest along Interstate Highway 94.

Any information about his whereabouts can be sent to the e-mail at this link.

MAPLE LAKE, MN — As the seventh year anniversary approaches for the disappearance of missing college student Joshua Guimond Nov. 10, his family is preparing for a “Justice for Josh,” march to keep his memory alive.

In addition to the march, the family has few kinds words to say about the university.  According to Joshua’s father, Brian Guimond, “One of several new facts regarding Joshua’s disappearance that we need to explore involves 11 known sex offenders who resided on campus when Joshua disappeared. If that is the case, we may never know the truth. The University and Abbey have a long history of withholding information from the public and law enforcement authorities.”   The public needs to be aware of this.

Guimond disappeared after leaving a small card party as a student at St. John’s University in Collegeville in 2002.