The 20th of November is synonymous with Spanish Catholic Patriotism 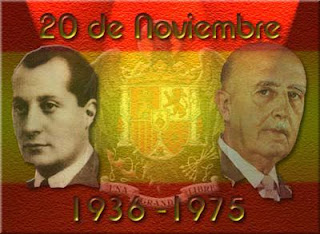 "The 20th of November is synonymous with

Since the death of the last Catholic head of state, Francisco Franco, on November 20th, 1975, the 20th of November has become synonymous with Catholic Spain. Every year throughout the peninsula the anniversary of Franco's death, which also coincides with the death of Jose Antonio Primo de Rivera in 1936, is commemorated.

On a national level, the memorial services in the Valle de los Caidos and the Plaza de Oriente have served as a testimony to the world that Catholicism is not dead in Spain. However, the enemies of God and Spain, have tried to suppress these celebrations and, unfortunately, have had success in doing so.

The attacks on the Valle de Los Caidos culminated with the nefarious “Law of Historical Memory” which prohibits anyone from entering the Basilica grounds with any political or religious regalia. Not only that, but this law has effectively barred visitors from seeing the the largest and most significant architectural monument of the twentieth century. Despite the persecution, due to the heroic resistance of the Benedictine Community that is adjacent to the Basilica, the Holy Sacrifice of the Mass is offered outdoors on the grounds near the Basilica.

Due to the prohibition of Mass in the Basilica, the Francisco Franco Foundation has been forced to move their yearly Traditional Latin Mass to the Church of Santa Gema in Madrid at 8:30 p.m.

On the same day the traditional “Christ the King” dinner, which is organized by the Movimiento Católico Espanol and the Acción Juvenil Española, will take place at the Hotel Mayorazgo near Gran Via and Plaza España in Madrid.

On Sunday the 21st the Nation Confederation of Veterans gathering in the Plaza de Oriente will feature speakers such as Blas Piñar as well as patriotic hymns and marches.

The weekend events will conclude with a dinner organized by Fuerza Nueva in the Hotel Centro Norte, near Chamartín Station in Madrid.

Posted by ExtraEcclesiamNullaSalus at 7:37 PM No comments: