And I say to you, my friends: Be not afraid of them who kill the body, and after that have no more that they can do. But I will shew you whom you shall fear: fear ye him, who after he hath killed, hath power to cast into hell. Yea, I say to you, fear him.

Edit: in the past few days there have been a lot of professed experts among the Apologetics Inc. people (it's more of a cult), the old EWTN crew and even a motorcycle hooligan of a Canon Lawyer (apparently an ex-Satanist), on Judaism and the Catholic Church.  They are now venting their collectivist fury upon anyone they perceive as deviating from the acceptable, progressive orthodoxy on the topic of  Judaism.  The blood lust is palpable.  Could this be the end of Catholic Apologetics?

While those addressing the question of Judaism critically, and fearlessly, are in short supply, there are no shortage of individuals who, not having studied the question very deeply, wish to assume the worst of people who merely believe and know what the Church has taught and lived for centuries.

The current mob within the Church, who are now attacking faithful Catholics, including faithful priests like Father Peter West, do not draw their inspiration from the scriptures, so much as novelties which have been put upon the Church in the last half-century, like the post-Conciliar interpretations of Vatican II. These interpreters, like Cardinal Kasper, Hans Kung, Cardinal Bernardin, were eager to show their zeal for the Jewish nation, even to the point of disparaging Scripture itself. These were the visible agents of a powerful force which imposed a Church-wide institutional disposition, declaring a unilateral peace with the Jewish people. Maybe Catholic hostility was in the past, but Jewish hostility towards Catholics? Certainly, the aforementioned Apologetics Inc. is more than eager to attack!

The Church had opened its door, and ever since it has ever been perilous to express any opinion which might coincide with actual Catholic teaching of the ages, especially not touching on Judaism, which might offend the imposed consensus, no matter how far that consensus and fanaticism on its behalf, falls from the sensus catholicus, love of neighbor, or indeed, the Catholic Faith itself. Nowhere is the auto-lesionistic disease afflicting the Church more evident. Thus it has come to pass that expressing an opinion on Judaism, even the most innocuous and apparently harmless, can lead to heights of rage that will land a man in a lot of hot water with those powers and principalities, like the aforementioned apologetics mafia who are the handmaids of this oppressive arrangement.  In many "civilized" Western countries, it can even mean prison.

In view of this situation, it seems worthwhile to revisit an instructive story.  One lone voice was raised years ago.  The man who raised it was nearly thrown out on the street.  Yet teaching Catholicism on a question touching on the Jews cost him his job as an instructor of Sacred Scripture. It must have been painful for him to make this stand, for teaching was something he loved doing, but we're grateful he did.  He still maintains this notion about the Jews and their Covenant which can
only be fulfilled in Christ's sacrifice on the cross.

Here is Father Echert's account as it appeared last year, which addressed the same problem which as raised its head again now that Cardinal Kasper and the Sankt Gallen Mafia rule at Santa Marta.  This was taken from AKA Catholic:

Less than two years into the new millennium, Moslem terrorists attacked the United States on 9/11, murdering thousands of Americans and sending hundreds of thousands of military troops to wars that would last for years. Among those deployed was a Catholic military chaplain from Minnesota, who was called to active duty from the classroom; this priest was also the Scripture Expert for the Eternal Word Television Network (EWTN) website. 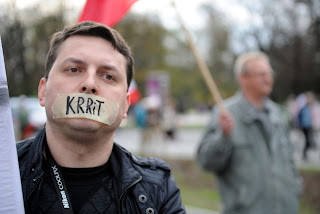 Poland.  On the 8th of June the Polish opposition party 'Law and Justice' is pllanning a demonstration at the European soccer championship in Poland 2012 against the refusal to grant a broadcasting license to the Catholic television station "Trwam'.  This was reported by the Polish newspaper 'Rzeczpolita'.  Recently 20,000 people demonstrated in Warsaw last Saturday for the granting of a license.