More than a thousand words:  As a Mass for the healing of the clergy was held, a crucifix began to bleed.  by Maria de Lourdes Couto, Rio de Janeiro 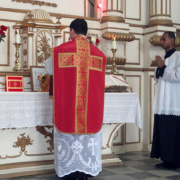 (kreuz.net)  On July 28th Traditional pilgrims betook themselves of the famous Sanctuary of  Jesus Crucified  in Porto das Caixas in the capital of Rio de Janeiro in southern Brazil.

The pilgrims were accompanied by Fr. Anderson Batista da Silva from the Archdiocese of Niteroi.

He celebrated the Old Mass at the sanctuary in the piety of a Missa Cantata.

The pilgrims journeyed in one bus.  They came from the cities of Rio, São Gonçalo und Niterói.

Porto das Caixas is a very poor and unsightly place.

It was made famous in 1969, however, as a crucifix above the altar began to bleed during a Triduum for the healing of the clergy.

Flecks of blood on the altar cloth

Because there was no sacristan, the priest then had to prepare the altar himself.

At that moment, he noticed a red mark on the altar cloth.  He believed at first that it was just a stain.  So he he just cleaned the spot away.

Then he celebrated Holy Mass.

As Mass finished some faithful noticed that blood was dripping from the crucifix.

They notified the priest of it.

The blood ran from the wounds of Jesus.  A laboratory confirmed with certainty that it was human blood.

Till today, the Sanctuary of the Crucified Jesus is visited by numerous visitors.

To honor the Precious Blood

The Mass for the pilgrims was celebrated to honor the Precious Blood of Jesus.

He is a great promoter of the Immemorial Mass of All Ages.

After the blessing the pilgrims had an opportunity to eat  and meet each other.

Finally, Fr. Batista gave a catechetical lecture, in which he emphasized the importance of personal repentance and the crime of abortion.

Portuguese Sermon during the Old Mass in Poto das Caixas