Bologna Has no Latin Mass 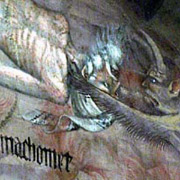 The picture shows how the false prophet Mohammed is exposed on a rock and tortured by a devil.  by Konstantin von Hemptin

(kreuz.net)  In Bologna --  the burial place of St. Dominick -- there is not one single public Holy Mass in the Latin language.

The 380,000 population city of Bologna is 220 kilometers south east of Milan.

Bologna is the city where St. Thomas of Aquinas (+1274) had studied and taught.

In the triduum of the Dominican feast there was no liturgy provided for in Latin .   That is, as it was made clear to me by friendly guardians of the church, has not been in use since the Second Vatican Council.

In the seven-fold church of St. Stephen of the Benedictines of the Mount of Olives there was no Latin Mass. 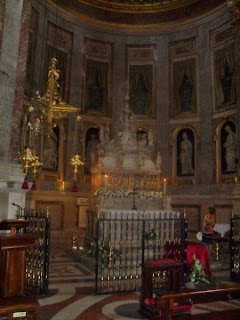 Even in St. Petronius, the greatest parish church in the world, in the Piazza Maggiore there is no Latin.

In the midst of an area formerly enclosed by communion rails, a modern Eucharist took place in Italian.

The critically acclaimed participatio was taken all too seriously by a nun.

She sang the ordinary alone in the highest notes.  The rest struggled to keep up.

Here and there wandered astonished tourists in the fourth chapel left of the most recent court of the master of Modena.

The painting shows, how the false prophet Mohammed is in an exposed position on a rock and tortured by a devil.

This was previously described by the Italian prince of poets, Dante Aligheri (+1321) in his Divine Comedy.