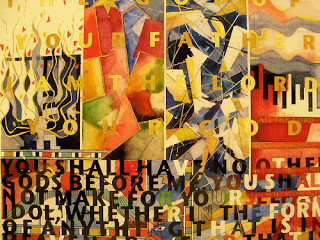 Edit: will it be the boxed deluxe edition set?   Here's the story from Bringmethenews.


When Pope Francis speaks to Congress on Thursday, he’ll come to Capitol Hill bearing a gift. And it’ll be a return to the U.S. for one of the rare editions of the St. John’s Bible.

The Pope will bestow an Apostles Edition of the Bible, which was commissioned by St. John’s Abbey and University in Collegeville, Christian Post reports.

The St. John’s Bible is believed to be the only hand-written and illuminated Bible produced since the printing press was invented.

They can probably sell it at a flea market for a few bucks to help pay the expenses for the Pope visit's security.
Posted by Tancred at 6:06 AM 11 comments: