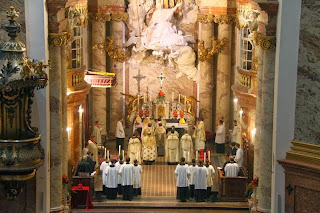 (Vienna) On the Memorial of St. Charles Borromeo the  Bishop of Chur, Vitus Huonder, celebrated a Pontifical High Mass in the Saint Charles Church consecrated in Vienna on November 4th. The Mass was offered in the magnificent Baroque church  in the awe-inspiring sacred liturgy of the Immemorial Rite, in which the worship of the Triune God and the realization of the bloodless sacrifice of the Cross of Jesus Christ are commemorated.
This was organized by Una Voce Austria.  There   Mass for five voices was performed by Giovanni Rovetta. The chorale was sung according to the Gradual Medicaeum.  In 1713 during the great plague, the Viennese Emperor Charles VI., promised his patron saint, Saint Charles Borromeo,  who also undertook the pastoral care of plague victims as cardinal and brought them Holy Communion, to build a Church.
It was built according to plans by Johann Bernhard Fischer von Erlach.  The church was consecrated in 1738.  It has been cared for ever since by the Knights of the Cross with the Red Star, founded in Prague in 1233. From 1783 to 1918, the Emperor exercised itself the right of patronage.
Text: Giuseppe Nardi
Image: Una Voce Austria
AMGD
Posted by Tancred at 1:11 PM 2 comments: