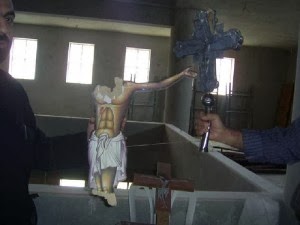 (Damascus) There were some two million Christians living in Syria at the beginning of the Civil War. At least 450,000 Christians have fled the country since March 2011 because of the war. According to Gregory III. Laham, Patriarch of the Melkites Greek Catholic Church united with Rome, every fourth Christian has been expelled from his home. The violence of the Islamists exaggerating the Christians to flee, the Patriarch of Antioch and the whole East told the BBC.

"The Christians will Survive"

There is not an exact number of Christians who've fled. According to Open Doors there are even many more Syrian Christians on the run. Patriarch Gregory III. Laham still firmly believes that "the Christian community will survive." As mentioned on an earlier occasion repeated the head of the Melkite that Christians are an important part of Syria for two thousand years. "They will again be an important building block for the country's reconstruction after the war, and do not need Assad to survive in Syria." Words with which the church leader wants to indicate to all warring parties that Christians are not a party in this conflict.

Islamists Have Killed 45 Christians in Sadad Because of Their Faith

In the Syrian Civil War 115,000 people have so far been killed, mainly civilians, including many Christians. The Christians are a favorite target, especially for the Islamists and al-Qaeda terrorists. The latest example is the attack on the Christian city Sadad. Today, Archbishop Boutros Selwanos Alnemeh, the Metropolitan of the Syrian Orthodox Church of Homs and Hama announced that "perpetrated the greatest massacre of Christians since the outbreak of the war" by the Islamists in Sadad. In the city of "innocent civilians were murdered simply because they are Christians. A total of 45 Christians were killed, including women and children. Most were buried in a mass grave," said the Archbishop.

30 are seriously wounded and ten are missing in the Christian community in the city. "1,500 families will be held by the Islamists as hostages and human shields," said the Metropolitan.

Link to katholisches... AMGD
Posted by Tancred at 11:26 PM 4 comments: