"The Pope is No Leftist, But He Talks Like a Leftist" -- Francis Receives the Radical Left of Europe 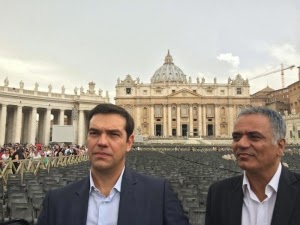 Alexis Tsipras before meeting with Pope Francis in St. Peter's Square
(Rome) "The Pope is not a leftist, but he talks like a leftist." Under this title devoted the left-liberal Austrian daily newspaper Der Standard not Pope Francis in its issue of September 19 in a full page, not under the headings religion or feuilleton, but International policy.
The occasion is indeed a "premiere" at the Vatican. The radical left in Europe was received by the Pope. That the "non-negotiable values" have been downgraded by Pope Francis for the world is down on the priority list, to facilitate the discussion. A further meeting for all official protocols is over.
No less than Alexis Tsipras, President  of the "reform communist" which came into being following the fall of the Soviet Union, the successor party to the Communist Party of Greece, Synaspismos (SYN), was received by Pope Francis in Santa Marta. In 2004 Tsirpas formed together with other radical left-wing groups led by SYN a Coalition of the Radical Left, briefly called SYRIZA, whose  President he is also.

After the Greek default and the implosion of the Socialist Party (PASOK), the radical left managed in the general election in 2012 with nearly 27 percent of the vote and 71 of 300 seats in Parliament, to ascend to the second strongest political force in the country.
In the European elections in May 2014, Tsirpas was the candidate for the presidency of the European Union, the European Left , as is the name of the concentration of communist and other radical left-wing parties, which could send MEPs from eight EU Member States  to the European Parliament, among them The Left  from Germany.
Alexis Tsipras, says the standard , "wants with Francis  - despite completely opposite beliefs - a fight against the economic crisis and the threat of war."

"Tensed" in the Vatican and "Unleashed" Out 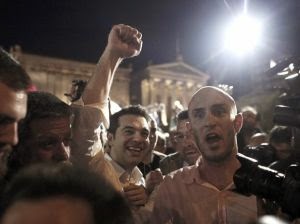 Tsipras after electoral success in 2012
As Standard correspondent Peter Mayr reported,  the left-wing delegation descended on the Vatican at 9.45. Tsirpas, who says of himself, he's an atheist, had, according to Mayr in entering the Vatican  was "tense". After two hours,  Tsirpas left  the Vatican "acting unleased." Tsirpas.There was talk of a "historic meeting".  The private audience lasted 30 minutes. The Greek government had exerted pressure to cancel the meeting. But Pope Francis received the head of the European radical left. "The Greek government doesn't like what I'm doing," said Tsirpas then to Standard.
Since the meeting took place with the "unofficial" form which Francis Pope preferred, there is no explanation from the Vatican. There remains, therefore, only the information by  Tsipras. In conversation with the pope the range of topics was "very broad". You span "poverty, migration, economic crisis and the prevailing threat of war". "The dialogue between the left and the Church is important. While there are different ideologies, in many respects, we want the same thing," said the Standard  citing Tsirpas.
The Pope had recognized the "importance of initiatives to fight against injustice". Greek domestic policy was also briefly treated: "The rich got richer, the poor poorer. We have rescued banks, not the people," Tsipras describes his summary to the Pope. 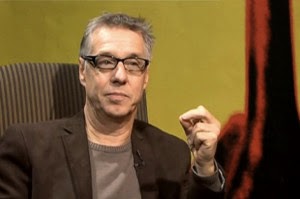 Walter Baier, 1994-2006 KPO Chairman
The meeting was "threaded" as the Standard described the meeting of Austrian communists Walter Baier. Baier is a communist veteran. Coming from a communist family, he was the 1977 President of the Vienna Communist Students Association (KSV) and Central Committee Member of the Communist Party of Austria (KPO). In 1987 he rose to the Politburo and his ideology remained loyal even after the collapse of the Eastern bloc. 1991-1994 he was Federal Secretary and 1994-2006 National Chairman of the Communist Party. Since then, Baier is Coordinator of transform! a network of 25 Communist and radical left-wing magazines in 18 European countries. For this network, he also sits on the International Council since 2001 as a left counter-organizer to the Davos World Economic Forum, and the World Economic Summit founded World Social Forum (WSF).
Seven months had passed in prepartion until the meeting with the Pope. Thus the radical left was "faster" than Vienna's Social Democratic mayor Michael Häupl. Its reception by the Pope is still pending for the radical left, but Baier is satisfied with the prestige of the success over the moderate left in the eternal struggle between Bolsheviks and Mensheviks.

"Pope is Open to the  Concerns on the Left" 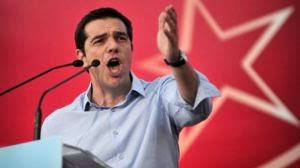 Tsirpas remained true to his ideology even after the end of the Soviet Union
Walter Baier has been active15 years  in the "dialogue" with  Catholic Church, but also the Protestant church and always finds open ears and doors for common "social" initiatives. Also, "the Pope is open to the concerns of the Left - social justice, critique of capitalism ," said Baier  to the Standard . Baier sees in the "prevailing crisis of institutionalized politics and political landscape" two institutions in a particular role: "the religious communities and the trade unions".
"Messages like acts of Francis  have this  reading" seconded the Standard correspondent. In the Gospel Gaudium the Pope said a "No to social inequality - brings the violence,". He also had criticized a "deification of money."

Evangelii Gaudium is a "biting critique of capitalism"

Baier and Tsipras agree: In the Gospel Gaudium the two communists  read a "scathing critique of capitalism". In it, the radical left wants to sense a "new tone". Ex-Communist Party leader and transform! President Baier are already dreaming of a "broad-based alliance". This could "build more pressure." As a litmus test, the radical left has been to the World Climate Summit of 2015 in Paris in its scope.
How it will go with the dialogue between leftists and Pope Francis, Tsipras does not know. This dialogue is still "important" because one had thing had become clear to him by the encounter, Tsipras told the Standard: "The Pope is not a leftist, but he speaks like a Leftist".
Text: Giuseppe Nardi
image: SYRIZA / KPO / Esatchos (screenshots)
Trans: Tancred vekron99@hotmail.com
Link to Katholishes...
AMDG
Posted by Tancred at 10:03 PM 8 comments: