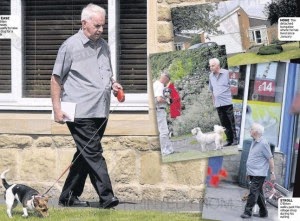 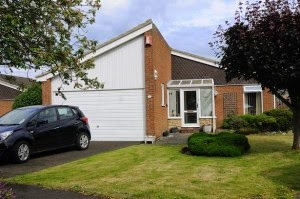 Cardinal [?] Joseph Ratzinger in the Cloister --- ++Gänswein Will Remain at His Side

(Vatican) Monsignor Georg Gänswein, the personal secretary of Pope Benedict XVI. will remain at his side after the resignation of the Pope, but retain the office of Prefect of the Pontifical Household. Thus from February 28th at 8pm  he will be on the side of the former Pope and at the same time the new Pope both. This unusual constellation was announced this morning by Vatican spokesman Father Federico Lombardi.
"Don George", as the secretary of the Pope is commonly referred to since the beginning of the Pontificate, will retire, according to the head of the "Press Room” to Castel Gandolfo on the afternoon of 28 February after the resignation of Cardinal Joseph Ratzinger. Them there are also the four Memores the four women who will follow him, who led the papal household. Benedict XVI, then Cardinal Ratzinger [Not sure about the title], will stay until the end of the conclave in the papal summer residence, and then return to the Mater Ecclesiae convent in the Vatican. The necessary renovations were already complete in November 2012, in place for the former Pope to occupy an apartment next to the cloister of the monastery. Gänswein will then live in the monastery with the former pope. A decision on the Vatikanist Andrea Tornielli already on 12th Reported in February.

The personal secretary of the reigning Pope was Benedict XVI. was only appointed the last 7th of December as Archbishop and Prefect of the Pontifical Household. At a time when the Pope had already decided to resign. According to L'Osservatore Romano  the intention to resign matured in Pope Benedict after the trip to Mexico and Cuba in March 2012. A decision-making process in which a nocturnal fall in the Mexican city of  Leon also may have played a role, which has been confirmed today by Father Lombardi. Gänswein received his ordination by the Pope personally during Epiphany.
The Prefect of the Papal Household has the task of organizing the public life of the Pope, especially the hearings and meetings of the Holy Father. From 1998 until the fall of 2012 Americans Archbishop James Michael Harvey has held that title. In November 2012 and since then Pope Benedict XVI.  has created him a Cardinal Archpriest of the Basilica of St. Paul Outside the Walls. With the appointment of Msgr Gänswein, the new prefect is the right hand of the pope resigning, which remains at his side, will continue to play a key position at the side of the new pope. A situation which seems to defy the Vatican statements that Benedict XVI. from the moment when he will be Cardinal Ratzinger, would exert no influence on the conclave and the future Pope.
Father Federico Lombardi explained that the future dual function of Curial Archbishop Gänswein alongside a foregone and a reigning pope so that the position of Prefect of the Papal Household is "No government official"  and has nothing to do with "substantive decisions". The Office had to do with the implementation of the papal audiences and meetings, not with the decision of who will be presented to the Pope and not. Therefore, there would be "no problem because of the close bond" the prefect to the predecessor of the future pope.
The Mater Ecclesiae convent of the Leonine Wall in the Vatican Gardens was founded by Pope John Paul II and in 1994 on inaugurated on the 13th anniversary of the attack against him.  It was the wish of the Pope to have a convent in the Vatican for their special Apostleship of Prayer prayig for the reigning pope and the Roman Curia. In the five-year cycle the orders and convent will change. Since 2009, a Salesian convent lives in the monastery. The sisters do needle, embroidery work for the papal household and supply these with fruits and vegetables from the monastery garden.
Text: Giuseppe Nardi
Image: Vatican Insider

Edit:  the way we figure it, things are pretty good when such open 68ers spread rumors like this.  When's Pax Christi going to be formally condemned.  Isn't that an upcoming event?

A north Italian Bishop had suggested the possibility of retirement for Benedict XVI.

Vatican City (kath.net/KNA) Vatican speaker Federico Lombardi has rejected speculations about the possibility of abdication for Pope Benedict XVI. At present the theme is not pressing, explained Lombardi on Tuesday. The north Italian Bishop Luigi Bettazzi (88), who was superior of Ivrea till 1999 and the long time President of the Catholic Peace Organization Pax Christi, had discussed the possibility of Pope Benedict's resignation in an interview.

As to a recent murder plot against the Pope Bettazzi had said: "I just can't imagine that", Benedict XVI. is a pure and spiritual man. He could imagine a resignation, however.

Lombardi then recalled that the Pope himself in his interview ook with publicist Peter Seewald had discussed this theme. There Benedict XVI. explained: "When the Pope comes to the awareness that he psychically, physically and spiritually can not manage his office any longer, then he has the right, indeed is understood to be duty bound to step down," In any case the Pope may not, in cases of difficulties or dangers "run from them", rather he must be firm in the face of difficult situations. 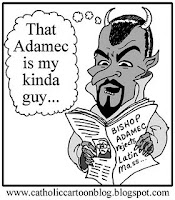 Bishop Adamec of the highly troubled Altoona-Johnestown Diocese retired in January of this year. How was it it was missed? Someone should have been popping the cork of champagne. But like the despot of a distant oriental country flooded with sand and camels tethered in the ruins of better days, his unhappy reign has passed like the report of a swinging rusty sign, deep in the rust belt somewhere between Detroit and Saginaw.

He's been accused justifiably of Simony and of being a protector of predatory homosexuals, while he has been a scourge to priests loyal to Rome. Now he's gone being replaced by Bishop Bartschak. Here's Bishop Bartschak's statement from the Diocesan rag:

I have spent almost twenty years assisting and advising the Most Rev. Donald Trautman, Bishop of Erie. I want to especially acknowledge his trust in me and the care which he has shown me as a father and brother. He has never been at a loss to offer me practical words of advice and encouragement. I am certainly grateful for the insights and encouragement that he has shared since learning of my appointment as Bishop of Altoona-Johnstown.

I am grateful to Bishop Adamec for the warm welcome and solicitude that he has shared with me in so many ways. He has been quite generous in providing me with the kind of help that is needed during the time of transition that continues for the next several weeks.

If he worked for Bishop Trautsperson, he can't be much better and is probably decidedly worse than the outgoing +Adamec. No doubt those trying to hear the Mass of their grandsires will find things difficult. Yet another Old Liberal given a position of trust where he doesn't belong. May God have mercy on the decaying and rusting Altoona-Jonestown Diocese.

Image from Catholic Cartoon blog.
Posted by Tancred at 9:34 AM 3 comments:

Cardinal Kasper denies rumours of his retirement next month and wonders who in the world would have said it. Of course, he quips, no one would be more pleased to retire than I.

He is responding, of course, to rumours last week on Bavarian radio that he would be replaced at the end of this November by Regensburg Bishop Gerhard Ludwig Müller. The Cardinal is, after all, 77 years old.

Link to original.
Posted by Tancred at 8:22 PM No comments: