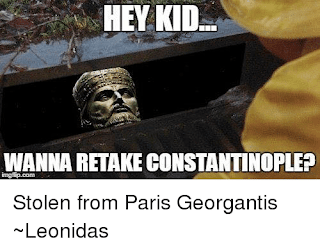 Edit: in a move that has been developing for some time, Turkey is going to continue to become increasingly Islamic, while the rest of the West becomes more secular. Nature abhors a vacuum but no one is even seriously considering retaking Constantinople.

A Turkish court has revoked the Byzantine-era Hagia Sophia's status as a museum, paving the way for it to be converted into a mosque as desired by President Recep Tayyip Erdogan. The building was once a cathedral.

A top Turkish court ruled Friday that the 1934 conversion of the Hagia Sophia into a museum was unlawful.

It canceled a 1934 cabinet decision and ruled that the UNESCO World Heritage site should be reopened to Muslim worship. The decision was in line with the Turkish President Recep Tayyip Erdogan’s calls to turn the site into a mosque despite international criticism. The United States and Orthodox Christian leaders are among those that have not approved of the decision.

Hagia Sophia to be Used For Islamic Prayers Again

[Greek City Times] As much of the world is struggling against the coronavirus pandemic, the Islamists in Turkey appear to hold on to their everlasting agenda: Forced Islamization and violation of non-Muslims.
Adhan (Islamic call to prayer) and the Koranic verses  Surat Al-Fath and Surat An Nasr were recited by two “imams” of the Hagia Sophia Church/museum, the pro-government newspaper Yeni Akit reported on March 23. The paper called the historic Cathedral the “Grand Hagia Sophia Mosque”.
“For the first time in history, acoustic test recordings of adhan and the Koran, which were recited with naked voice, were made in Hagia Sophia,” the paper said.
https://greekcitytimes.com/2020/03/29/turkey-uses-hagia-sophia-as-mosque-for-islamic-prayer-again/
AMDG