Young Priest Names Benedict in Canon But Not Francis

[Gloria.tv] Father Enrico Bernasconi, an assistant priest in Torremaggiore, San Severo Diocese, Italy, believes that Benedict XVI has not resigned and is still Pope, despite Benedict XVI protesting otherwise.
Bernasconi, who was ordained 3.5 years ago, told Rivelazione.net (April 28) that he feels encouraged by Benedict’s gestures like keeping his Pontifical name, the white cassock and the signature including the acronym P.P. (Pontifex Pontificum).
Bernasconi therefore decided in his "conscience" that Francis is not a pope and, therefore, names Benedict XVI during Mass.
He follows the example of retired Archbishop Lenga and Father Francesco D’Erasmo.

Edit: what would Don Leonardo Ricotta think of this?

AMDG
Posted by Tancred at 4:19 AM No comments:

Growth in Cistercian Stift Heiligenkreuz: "That is a Record!"

Theology professor Father Karl Wallner: "As I entered, we were 42, now we are 91 - last when we were so many was 700 years ago." - Also record number of Novices

Heiligenkreuz (kath.net/pl) There is a record number of members in the Convention of the Cistercian Abbey of Heiligenkreuz near Vienna: "As I entered, we were 42, now we are 91 - last when we were so many was 700 years ago" This was Father Karl Wallner OCist on Facebook. The theology professor Wallner is Rector of the College of Philosophy and Theology of Benedict XVI. in Heiligenkreuz. Last Friday, 8 young men were vested in our Stift Heiligenkreuz as novices. This is a record," he also wrote. He had been "truly moved" for the vesting of the novices, because he "has long known" all the new friars. In the short term the Heiligenkreuz Cistercian order had even 13 novices (see photo), since the last year's entries, they will be putting their first temporary profession in a few days.

Wallner explained further: "The 1-year novitiate is a trial period, you can also come back, that's okay! Of the 6 vested last year, 5 have remained. Let us pray that the young people mature and grow and serve God and men with all our strength."

The homepage of the monastery of Heiligenkreuz also speaks of a "record vestitures" because although we have many vocations and always a lot of new entrants, but we have never had 8 before..." There was further reported:" In the chapter house, Lord Abbot emphasized during his address that this is a time of testing: The novices examine themselves, they are tested by the Community and they consider themselves the Community ... Then he vested the 8 "newcomers" ("novices") in the white religious habit, which he blessed beforehand. At the end, the 8 novices knelt before the Lord Abbot and received the blessing."

In addition, Brother Konrad Ludwig made his perpetual profession on the Solemnity of the Assumption of which a beautiful video conveys the impressions. The young monk was baptized as a child by the current Heiligenkreuz Abbot Maximilian in the name of "Maximilian". The following remark can be found on the website of the Cistercian abbey: "The ways of the Lord are unfathomable, His former baptizing priest is now his abbot!" 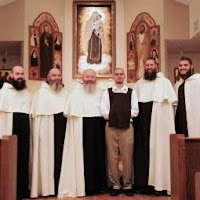