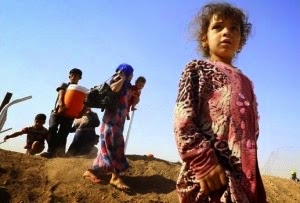 The Chaldean Patriarch Raphael I Louis Sako of Baghdad, who had directed a desperate cry for help to Pope Francis a few days ago, said: "They create a void, an emptiness. In Syria, there is an intact army fighting against the Islamists. In Iraq, there is no army that can protect anyone. The Kurds withdrew into their territories. They only have light weapons.The Islamists are very well armed. Thousands of people are on the streets on the run. Their goal is uncertain. If no help comes, droit 50,000 of them the death by hunger and thirst. There are women, children, old people. It is necessary to mobilize the conscience of public opinion in all countries. The people on the run, walk, experience their Via Crucis.
Asianews has now started a  concrete relief effort, which will find imitation hopefully also in the  rest of the world.  Donations will be collected under the keywords: "Adopt a Christian from Mosul." With five euros a day a refugee can be helped. The money will be sent to the Patriarchate of Baghdad to coordinate the relief effort for the persecuted Christians.
Text: Giuseppe Nardi
image: Asianews / tempos
Trans:; Tancred vekron99@hotmail.com
Link to Katholisches...
AMGD
Posted by Tancred at 9:27 PM 5 comments: