Church in Canada: Campaign for Life and Against Secularism 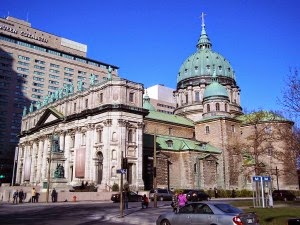 (Ottawa) hardly noticed by the Catholic public is a major confrontation between Catholic faithful on the one hand and modernist shepherds and their secular apparatus found in Canada on the other.
This is particularly striking, since Canada was once upon a time, despite being long problematic, a fertile area for the Roman Catholic Church.
In the East, for more than four centuries of French-speaking Catholic presence there were many great missionaries, including many Jesuits, many martyrs, there was active missionary activity and deep roots in the French-Canadian population.
In the western part of  Anglophone Canada there is a strong presence of immigrants from Catholic countries with strong influences from the United States and Great Britain, both religious and typical characteristics as usually occurs through contact and dealing with Anglican and Protestant denominations.

Over the past 50 years, this structure was put under  very severe stress, such as is well documented on the website www.dici.org.
In the French-speaking areas,  a vast laicization of  the population occurred. The 2nd Vatican Council and its local "implementation" ensured a huge disorientation among the local clergy and the absence of substance and liturgical debauchery brought great alienation underway of the original  majority portion of the devout Catholic population of the Church.
Many churches, including cathedrals are closed, sold, profaned, often demolished. Nevertheless, the main activity of many now numerically very small dioceses (up to 8,000 believers) appears to be combating the Society of St. Pius X  (as it is now in the diocese of Chicoutimi, where the bishop has never had a zeal for new evangelization.) 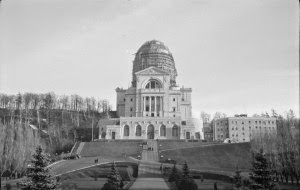 Sanctuary Oratory of Saint-Joseph du Mont-Royal Montreal (1937 under construction)
Since believers have thus organized a visit by a priest of the SSPX there in Saguenay, nerves are on edge. First, in the journey was  the  visitation of the aging Augustinian monastery where a 90 year old nun almost collapsed with joy, because for after over half a century, at last there was a Catholic priest in cassock at the door (so much for the ordinary pastoral care).
Second, Father has celebrated a Mass in the traditional rite on 15 February 2015, which caused a lot of interest among the people thirsting for religion, but in the diocese, it lead to the worst threats and has led to imprecations  not to participate in this.
A very strange reaction, the secularization in the French-speaking Quebec once the most Catholic place  in the world, with a 95% decline of practicing Catholics  from 1965 to now. Many religious retreat, or merge with the Anglo-Canadian brothers and sisters. Consider as a particularly significant example since the once very great and proud Jesuit province of Quebec had its own  seminary  in the English Jesuit province of Canada.

Evaporation of the Catholic Order

The Canadian  Conference of Religious  numbers at the moment its number of communities / religious houses to 200, with approximately 16,000 members, of whom 94 percent were older than 60 years and not less than 50 percent were older than 80 years!
In Anglo Canada, however, the Roman Catholics are significantly closer to their faith and Catholic doctrine   with her younger tradition of immigration (Irish, Italians, Spaniards, Portuguese, Filipinos). The members are on average younger and there is also a higher percentage of young religious.
At the same time there, through, the neighborhood with the USA and by a common language, close contacts and similar conduct cause problems and threats. The clergy and the bishops especially, are usually  very progressive and very interested in dialogue and understanding of the world. Also some orders with a focus in Canada are very modernist leaning: particularly known here are the "Basilian Fathers".

Secularization pressure by the State

For several years, an aggressive campaign for the right to abortion, gender, for early and rabid sex education in schools and the special feature of the man-woman-child family is now run by the secular state, very similar to the US and in France. In contrast, strong protest has developed, for example by the Campaign for Life Coalition, by PAFE (Parents as Educators First) by REAL Women of Canada.  Legally, they fight their way through with the CCRL (Catholic Civil Rights League) against the paternalism of the state.
The bishops, however, has surrendered long ago. Cardinal Thomas Collins of the Archdiocese of Toronto, to dialogue with the world and avoid conflicts and understanding modernity, announced recently in the statement: "Schools have a responsibility to teach the curriculum set out by the Ministry of Education" (Schools have an obligation to inform the curriculum of the Ministry of Education). He thus revealed the identity of the free Catholic schools.

Surrender of the bishops, opposition of parents

The secular state justifies itself that the Institute of Catholic Education had (founded in 1986 by the Episcopal Conference) demanded this and  (occupied by progressive loving people) a committee has given its consent by Cardinal Collins' feedback and advice. "
Meanwhile, tens of thousands of parents have signed a protest petition to the government and to the Canadian episcopate.
There are very detailed and engaged reports on the internet. The website www.LifeSiteNews.com has provided an extensive article and linked it with the statement of Cardinal Robert Sarah: "Detaching pastoral practice from catholic doctrine is a dangerous schizophrenic pathology." The statement comes from the book "Dieu ou Rien" (God or Nothing) by Cardinal Sarah, published in Paris by Fayard, from the strange to say disappearing of the previously mentioned foreword by Pope em. Benedict XVI. (see separate report ).

The Synod of Bishops on the Family 2015 is awaited in Catholic Canada with the eyes of Argus.
Much attention was given an obscene insult upon Cardinal Raymond Burke on 7 February 2015, produced by Father Timothy Scott, the longtime spokesman for the Basilian Fathers . Only after massive protests was the tweet deleted on 22 February 2015. To date, it is unknown whether this priest continues as a spokesman for the Basilian Fathers. This order  only offered  a short "Sorry too".
The Canadian episcopate is silent (as the French episcopate is in the Manif pour Tous and the Veilleurs ). From the Vatican you can hear nothing.

A particularly explosive situation in Canada is  related to some of the largest and most heinous mass abuse cases in the Church took place here. A native of West Flanders, Oblate missionary Eric Dejaegher was sentenced to a very long prison sentence just as the end of January 2015. Another hearing  against him will take place in Edmonton Alberta. At the St. Joseph's College in Edmonton, incidentally, the aforementioned Father Timothy Scott was rector.
Many diocese have come to penury because of  large payments of compensation for abuses by church representatives.  In 2013 the closing reports of two churches in the Archdiocese of Antigonish were due to financial problems that involved giving compensation.

Highly sensitized and motivated militant believers; serious wrongdoing within the church; fundamental threat to the Church's teaching; Contempt and obscenity against brave reputable cardinals; feeble shepherds, articulated for the world spirit; serious financial problems and pastoral withdrawal across a broad front. In Canada, there seems to be no longer a local skirmish engagement before the main argument. Instead, here is already an enormous pitched battle in a minefield.
Text: Amand Timmermans
image: Wikicommons
Trans: Tancred vekron99@hotmail.com
Link to Katholisches...
AMDG