Papal Honor for Cardinal Siri: But not for His Pupils 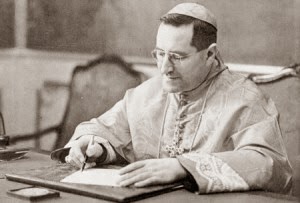 (Rome) on 27 February  Pope Francis led the Plenary Assembly of the Congregation of Bishops. An "unprecedented presence", as the Prefect of the Congregation, Cardinal Marc Ouellet of French Canadians remarked.  In fact, no one can remember that a pope had ever before done the like. On this occasion, Pope Francis held a long speech for the assembled 33 members of the Congregation  on the criteria that they would have to consider when choosing a good bishop, and then he mentioned Cardinal Giuseppe Siri.
Among other things, the Pope said:
"The Church does not need apologists for their own account, nor  Crusaders in their own battles, but humble sowers  who trust in the truth, who know that they will always be renewed  and  trust in its strength. Bishops, even if it is going to be night and they are tired from the effort of the day, are aware that the seed germinates in the field. Patient men because they know that the weeds will never be enough to fill the whole field. The human heart is made for wheat. The enemy was the one who planted the bad seeds in secret. Thus the time of the weed has been  already unalterably set."
Then he added:
"I would particularly like to emphasize: patient men! It is said that Cardinal Siri used to say, Five are the virtues of a bishop. Firstly, the patience, the patience, secondly, thirdly, the patience, the patience, fourthly and lastly, the patience with those who remind us to have patience."

The "Cleansing" of Rome of the Sirians

Cardinal Giuseppe Siri (1906-1989) was the masterfully eloquent  Archbishop of Genoa whom Pope Pius XII. would have wanted as his successor, but the cardinals in the conclave preferred, however, in 1958,  Pope John XXIII. and by the direction taken by this way, led to the Second Vatican Council in 1963 with Paul VI.  In retrospect, this was clearly a directional decision. Cardinal Siri was the only Church representative whom Pope Francis mentioned  in his address to the Congregation for Bishops. A naming which clove to a paradoxical connotation.

"Politics" by Gestures: Paradoxical Naming of Siri for the "Cleansing" of Rome of the Sirians

The naming ad honorem came after Pope Francis had removed from the Congregation of Bishops, precisely those two cardinals who were ordained priests by Cardinal Siri.  They were Cardinals Angelo Bagnasco and Mauro Piacenza. And after another man of the Church Cardinal Siri had laid his hands on for ordination to the priesthood, the Patriarch of Venice, Francesco Moraglia, was deleted from the list of new cardinals, although the patriarchal chair behind the archbishopric of Milan is connected to the cardinalate and traditionally ever heard of as the most important of episcopal sees in the world. From Venice there came three popes alone in the last century.  Among these included in the "purge" was  the removal of the American Raymond Leo Cardinal Burke. Although he does not come right out of the Siri School, he feels gladly associated with them and he counts his understanding of the Church with that of  the losing candidate of the 1958 and 1963 Conclave.
The highest remaining "Sirian" in the Vatican is thus Monsignor Guido Marini, the master of ceremonies of the Pope.  Guido Marini was appointed by Pope Benedict XVI. in 2007 to the office to initiate the reform of the liturgical reform.  As a seminarian, he  was the last of the Caudatarius Episcopi of Cardinal Siri. He was, however, already consecrated by Siris successor, Cardinal Giovanni Canestri. Pope Francis seems to have little in common with Cardinal Siri and his understanding of the Church. The mention of Siri with a content innocuous sentence, therefore, seems to be more a  part of that "policy" by gestures. This view is in any case that of those progressives who cheer most loudly for the Argentine Pope, who compare him since his election  with John XXIII. Also wanting   to attempt to create a new situation  as in summoning the convocation of the  Second Vatican Council.
Text: Giuseppe Nardi
image: Wikicommons
Trans: Tancred vekron99@hotmail.com
Link to Katholisches...
AMGD
Posted by Tancred at 3:42 AM 12 comments: