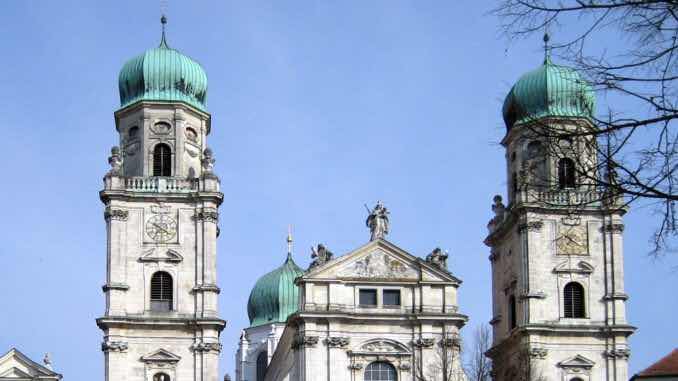 In the diocese of Passau there are problems in the implementation of Summorum Pontificum. Not for the first time. Pictured: The Passau Cathedral.
(Passau) The Motu proprio Summorum Pontificum represents a law binding on the universal Church. However, eleven years after its entry into force there are still bishops who disregard it.
At a well-known Lower Bavarian place of pilgrimage a group of believers are formed with the desire for a Holy Mass in the Immemorial Mass of the Roman Rite. The size of the group at 30 met all the necessary conditions, which are called for in the motu proprio.
The church rector of the Pauline Order responsible for the pilgrimage church was informed and agreed that a priest proposed by the faithful should celebrate Holy Mass in its traditional form.
The Pauline Order is a Polish men's order whose motherhouse is located in Czestochowa. He has two monasteries in the diocese of Passau. Since 2002 he has been in charge of the famous pilgrimage church Maria Hilf Ober Passau. Since 2014, the well-known pilgrimage church on Gartlberg.
For now, once a month, a Mass is supposed to take place. For two months in a row it could actually happen that way.
"A probably bad-tempered person must have communicated this to the diocesan instruction of Passau,” it is said in a copy available to the editors.
The Diocesan leadership ordered the end of these Mass celebrations. The place of pilgrimage is not to become a place of Mass celebrations for the traditional rite. The church rector was no longer allowed to provide the church for the celebration. Otherwise, the competent religious priest was apparently threatened with action.
A conversation with the faithful, who want a Holy Mass in the traditional form, was not sought by the diocesan instructions. They were "ignored", as the letter says.
The binding Motu proprio Summorum Pontificum speaks a clear language:

Art. 5 § 1. In parishes, where a group of faithful adhering to the earlier liturgical tradition exists permanently, the pastor willingly accepted their requests to celebrate the Mass according to the Roman Missal published in 1962.

It is not the first time that the implementation of the motu proprio of Benedict XVI has been hampered in the diocese of Passau. It is the traditional rite, which for more than a decade after the entry into force of Summorum Pontificum,
causes consternation.
Experts suggest that wherever problems arise with the implementation of Summorum Pontificum, contact the relevant Pontifical Commission Ecclesia Dei in Rome. The Commission works efficiently and swiftly.
Text: Giuseppe Nardi
Image: Wikicommons
Trans: Tancred vekron99@hotmail.com
AMDG
Posted by Tancred at 2:30 PM 3 comments:

Passau (kath.net/pbp) The Bishop of Passau, Stefan Oster SDB is looking forward to his first Christmas in the diocese of Passau. "I would particularly like to invite you now to the festive Christmas church services in the cathedral, but of course also in the other churches of our diocese," he stressed. For weeks now, a lot of Christmas mail has arrived at the chancery. "I'm happy about every single letter and every card," said Bishop Stefan. "The great appreciation, the good wishes are extended to me by so many people, touches me," says the chief shepherd of Passau. Several hundred letters are already on the bishop's desk.

Furthermore, the bishop added but added: "At the same time I also have the impression that for many people and organizations in the pressure of having to do the Christmas mail, annual increases and the many hours involved, sometimes days and weeks are noticeable. Even for myself. That is a time when we little have time for little else, let alone to really turn in prayer to Christ who wants to touch us and meet us in this day."

Therefore, Bishop Stefan wants to set an example in this year and give up writing Christmas cards. He connects it with the promise that all who have written to him or are writing, are included in his prayers. He is also accessing the modern tools of electronic greeting postcards, which are to make available to all people his Christmas blessings, especially those who have written to him.

Next week, a Christmas greeting on the website of the Diocese will be available. This version also brings aid to people in need: Bishop Stefan donates the money that is saved for cards, letters and postage for the Child and Youth Services in Sierra Leone. In the local capital, Freetown, Salesian Brother Lothar Wagner works with street children and currently cares mainly about Ebola Ebola orphans or survivors. Photo Bishop Oster (c) Roman Catholic Diocese of Passau