Leftist Kulturkampf Against Young Blessed --- Who Always Seems to "Offend" 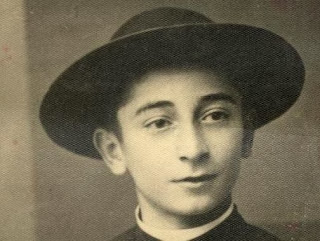 (Rome) Who owns the school? A particular political direction? How does indoctrination take place in the school? Or in other words: why does a particular political spectrum put so much value to the state and the state's control, which allows control of the school and  in order to control citizens  by the state? A small example from Italy, which is exemplary. The history of northern Italy is not the history of Italy, much less the history of Germany or Austria, Switzerland is the exception anyway. Nevertheless, parallels will be readily apparent. Names and historical contexts change, but a certain methodology remains the same. It's about the history of sovereignty
On 5 October Rolando Rivi was beatified ( see separate report ). The only 14-year-old high school student was murdered by Communist partisans on 10 April 1945 out of hatred for the faith, a few days before the war ended. Kidnapping and execution of the young seminarians took place in the Italian Emilia, in the so-called "Triangle of Death", which was controlled at the end of the war by Communist associations. Armed groups, who were  fighting against fascism and the German occupation forces, but not for freedom and democracy, but for the establishment of a Soviet Republic. A truth of this political side is not  heard happily today  and is largely concealed in the formation of public opinion. That was also the reason why the beatification of the young martyr,  just 68 years after his murder was possible.
But the Left is always outraged and their censorship always works. In Rio Saliceto in Rivis' home,  an exhibition about the young Blessed was shown on the occasion of the beatification. The compulsory education of Rio Saliceto interrupted regular classes for visits to the exhibition. The visit was part of Catholic religious education and was directed, anyway.  only to students who are registered for religious education.

The exhibition  was held in the parish hall "which  some parents wanted  to see as an insult to the Resistance" as the local press reported.  Since the Resistance is called in Italy the partisan resistance "against Nazi fascism." The  main support of armed resistance were Communist organizations.
Under pressure from the parents, the school director ended the exhibition visits. Before school he had a leaflet in which he justified the decision with "lack of time", "to question the exhibition from a historic and didactic point of view in the larger context."
Giuseppe Pagliani, group spokesman for the citizen's  opposition in the council,  sees the decision as merely "another episode of intolerance and censorship to dim the memory of the young martyr, because you want to hide the crimes of the Communist partisans."   There are aspects of resistance, "for which they can only be ashamed. Therefore, you do not want that the students learn that there were communist partisans, who cold-bloodedly murdered a boy of 14 years, while shouting,  'tomorrow we have one priest less.'"  The school's decision is all the greater when, Anne Frank is mentioned. But the memory is a caricature, if it takes place under the ideological sign.

In the "Red Emilia" it always come back to these cases of censorship, as Giuseppe Pagliani. Rolando Rivi was a nuisance for the Communists in 1945 and he is a nuisance for them even today. "The Communist trade union CGIL and Partisan Association ANPI have engaged pressure  for years  to block any attempt to name a street or a place after Rivi.  Efforts were made in several places, including the cities of Reggio Emilia and Modena," said Pagliani. The intention is clear: The general aim was to prevent the name of one of the many innocent victims of the Communist partisans from being known and receiving public importance. "Since Rivi has been beatified, his tragic story is but better known. More and more people learn of what has been concealed. Thus, those who are  influenced by communism like the  Emilia region, have to face their own history, " said Pagliani.
Text: Giuseppe Nardi
image: Una Fides
Trans: Tancred vekron99@hotmail.com