Orthodox Give Pope Francis a Tiara 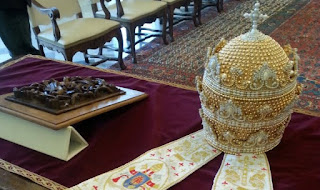 (Rome) Pope Francis now has a tiara. The special gift was brought to him by the Macedonian Parliament Speaker Trajko Veljanoski.
Veljanovski was received by Francis in audience on Whit Monday. He spoke of an invitation from his country to the Catholic Church leader to visit the Balkan country. He recalled that Mother Teresa of Calcutta, who was canonized on September 4, was born in Skopje, now the capital of Macedonia.

Veljanovski brought the visibly surprised Pope, a gift from the Orthodox St. George convent of Rajčica. The tiara was made by the nuns of the convent, crafted and richly embroidered with pearls from nearby Lake Ohrid. The pendilia, the two neck straps of the tiara, symbolizing the Old and New Testaments, were embroidered with the arms of Pope Francis.
The Macedonian Parliament President was aware that the popes have worn no tiara since 1963.  Pope Paul VI. was the most recent head of the church, who was crowned with the tiara. The Popes John Paul I and John Paul II did, although no longer crowned with the tiara, used it just as their predecessors before them as a crest.


Pope Benedict XVI. was led at the suggestion of Cardinal Andrea Cordero Lanza di Montezemolo, the herald of the Holy See, to also not include it on his crest. Pope Francis followed him there.
But the mitre, which is adorned with three golden horizontal rings, which forms in stylized form the three rows on the crown, representing the Magisterium, the jurisdiction and the ordained ministry of the pope as Vicar of Christ.

Bulgaria's President gave an icon of St. Clement of Ohrid

Lake Ohrid had to do with the second visit on Whit Monday. That same morning, Pope Francis had already received the President of Bulgaria Rosen Plevneliev, Accompanying Plevneliev was the Bulgarian Orthodox Patriarch Neofit. The Bulgarian head of state gave the pope an icon of St. Clement of Ohrid. The monastery founder and Metropolitan of Belica and Ohrid, was a student of St. Cyril and Methodius. On Ohrid St. Clement had built the so-called Ohrid School.
Pope Francis thanked the Macedonian and the Bulgarian delegation with copies of his Encyclical Laudato si and his apostolic exhortation Evangelii gaudium and Amoris laetitia . 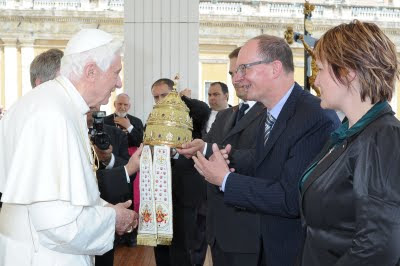 Wow, this is simply wonderful. Orbis Catholicus has these photos, here, of the Holy Father being presented with a Papal Tiara.

Where's that girl's white mantilla, and, is she married?