Francisco de la Cigoña on the Worth of the Papal Office

“Must the Pope bless every pizza at a restaurant in Trastevere before running cameras?” 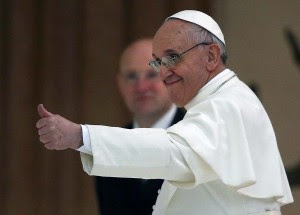 (Madrid/Rome) The Spanish Church Historian Francisco Fernández de la Cigoña, who is the Spanish speaking world famous Catholic, non-Traditionalist blogger, is among the most bitter critics of Jorge Mario Cardinal Bergoglio as Archbhishop of Buenos Aires. That of all things the Argentine Primate had, of all the Cardinals, been considered as the possible successor of Benedict XVI. the fisher of men, a few hours before the election of Pope Francis, while he criticized him in connection with the most recent occupation at the Cathedral of Buenos Aires, must have been quite a shock.

De la Cigoña has commented on the Habemus Papam therefore with as much professional discipline, as Catholic devotion: “Cardinal Bergoglio is dead, long live Pope Francis!”

On multiple occasions he has stressed since that there is little sense in criticizing someone during the first 100 days of their office. Much more, he published several times the statements of the new Pope, which made him “feel very good”. After 20 days of the new Pontificate it seemed that at least at one point the self-imposed threads of patience are torn. On Eastern Monday he published a long commentary under the title The Pope is Neither a Pastor Nor a Bishop. Then he addressed the most striking gestures of the Pontificate in the first weeks, which to give the to the faithful instead of blessing, a media staged, but less religious one with the thumbs up high after which the motto appeared “Everything is super, everything great”. Had anyone had noticed this, that this gesture is not universally hailed as positive throughout the world, like in Turkey, where it is understood as an invitation to homosexual depravity?

We have documented the following commentary by Francisco Fernández de la Cigoña in English from another German translation (since no one has a Spanish one yet):

The Pope is Neither a Pastor Nor a Bishop

As always I am opposed to giving you my personal opinions, which should not be shared. It is not the voice of the Church, if I also try to speak of this. Sometimes I am successful, other times not. Not from a lack of will, but from a lack of knowledge.

What is expected of Pope Francis, so to us, at least until now, have been sold this picture of the Pope as pastor or of the Pope as Bishop: he is so simple and so humble, that he doesn’t want to be Pope. And he conceals his Papalness, where only he can. With his shoes as with his ring, with his pectoral cross and with his clothes, with his living quarters and with his bearing… he lives with everyone, he talks with everyone and it seems, as if he wouldn’t know anything else. He has not once been a Primus inter pares. Not to the Cardinals, and not once to the Bishops, to the priests, the gardener…

At the end of his daily Mass he greets the concelebrants and the faithful, who have participated, at the chapel door as a pastor. He calls his friends on the telephone, in order to wish them Happy Easter, he hurries then to pay for his lodging and some days we will see him on television, as he is polishing his already famous black shoes. Some already play the game “Where is the ring?” with the question, if he will wear the ring of the Pope today, of a Bishop or even none.

Nothing of this must be the object of criticism, even when one must not be pleased by them, which not many do. And although he also is still does the opposite of those things, which happened in past pontificates: “He is also good and not Bendict or John Paul”. Even if the wish of Pope Francis may be strange.

We have been moved by a minimalistic Pope in his appearance as Pope. We were not accustomed to it. We normal Catholics, excepting those, who would only rely on our judgements, but dismiss the Church, have such a special respect for the representative of Christ, that all forms of earned respect seem too little. And in the course of the centuries many forms have taken root. Some were already untimely by the turn of the century, like the Sedia Gestatoria and the Tiara. It was time, that they were taken away to become museum pieces. Without that something is passed. I think however, that it is good, that the representative of Christ, should be addressed with respectful love. And that it would not be good for him to be stripped in this respect or that he should strip himself of these things.

In Spain we had a pitiful Bishop “shoe I will call Ramon”, who, though he is still living, will be forgotten by everyone. I will not say that this is the case, but there is already a certain similarity which horrifies me. It is not attractive for all, nor is it however repellent for many. To seek out those nearby is surely good, but without overfamiliarity and tastelessness.

God uses the unexpected ways, so that His Grace can enter the hearts of men. And some of them can without a doubt be the frugality and humility of a Pope. It can be. Surely it is, however, not. Does one receive these assurances when the Pope on one day blesses the pizza in a restaurant on Trastevere? And kisses the lady cook, because she has prepared it so well? And all of this before running cameras? I have the impression, it can be, that I am wrong, that everyone doesn’t like this, completely on the contrary.

This is my opinion. Right or wrong. And this is how I sum it up as such.