(Rome / Asuncion) Pope Francis will visit Paraguay on 15 November 2015. The date has not yet been confirmed by the Holy See, but seems to have been agreed with by the Episcopal Conference of the South American country. The Pope doesn't want to visit his native Argentina till  2016. A visit to the Diocese of Ciudad del Este, whose outstanding diocesan Bishop, Rogelio Livieres. whome the pope deposed at the end of September, is not provided for.
The pastoral visit to Paraguay was made known by the Mayor of Caacupé, Roberto Franco, who appealed to Bishop Catalino Claudio Giménez Medina. The Bishop of Caacupé and chairman of the Paraguayan Episcopal Conference had just returned from a visit with Pope Francis in Santa Marta. According to Mayor Franco, Pope Francis told the bishop   he wants to visit the great Marian National Shrine of Nuestra Señora de los Milagros de Caacupé on 15 November.
Bishop Giménez has not yet confirmed the Pope's visit to journalists about the exact date. The trip will take place, "the date is not sure yet, because the final step took place with changes that require only familiarization."  An allusion to the description made by Pope Francis a week ago in a reshuffle of the Vatican State Department. The former "foreign minister", Msgr. Dominique Mamberti was appointed Prefect of the Apostolic Signatura and Msgr. Paul Richard Gallagher as the new "foreign minister". Msgr. Mamberti is succeeding Cardinal Burke, exiled in a papal retaliation from the Roman Curia. 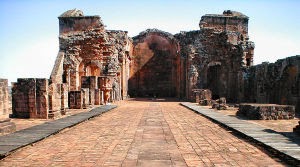 Even the ruins of Trinity Church still impress
According to Ultima Hora  scheduled destinations besides Caacupé are the cities Villarrica and the capital Asuncion. In addition, Pope Francis wanted to visit the ruins of the Jesuit reduction Itapua and thus show reverence to the Jesuit Missions of the reductions of the 17th and 18th centuries. Probably he would visit the former  Reduction of La Santísima Trinidad de Paraná (Holy Trinity of Paraná), which was declared a UNESCO World Culture Site of mankind.
Moreover, the Pope is expected to visit an indigenous community in the Rio Pilcomayo in the Chaco. No visit is planned in the Diocese of Ciudad del Este, which was an exception among the dioceses in Paraguay until recently.  Although only ten percent of Catholics in the country belong to Ciudad del Este,  the priest candidates of its diocesan seminary outnumber by three times all of the other dioceses together. The 2004   Bishop Rogelio Livieres Plano of Opus Dei was appoited by John Paul II, who created a diocese that was flourishing in many respects in ten years. A flower that was based by a return to the unabridged Catholic doctrine and its proclamation. Bishop Livieres also promoted the traditional form of the Roman Rite, which is celebrated in almost all parishes next to the Novus Ordo.
On September 24, 2014, Pope Francis deposed the Bishop  without specific allegations. From the brief explanation by the Press Office of the Holy See it was deduced that the other bishops had urged the removal of the bishop, because he had obviously disturbed the "unity" among the bishops (see Pope Francis sets from Bishop Livieres - intrigues against faithful bishops continues ).
Text: Giuseppe Nardi
image: Portal Guarani / Wikicommons
Trans: Tancred vekron99@hotmail.com
AMDG