"The Vatican has given the green light" - Argentina's CGT union launches a campaign for the canonization of Eva Peron five months before the presidential election.

(Rome) CGT is the largest union in Argentina. For the upcoming May 27th, it has called a nationwide general strike against the government and demands, on the occasion of her 100th birthday, the canonization of Eve "Evita" Peron.


"On its 100th anniversary, the CGT declares Evita the saint of the people."

This is the title of a publication that was presented on Tuesday evening in Calle Azopardo in the historic headquarters of the  Confederación General del Trabajo de la República Argentina (CGT), or General Trade Union Confederation. The presentation in Salon Felipe Vallese kicked off a campaign by the Peronist union to "achieve the canonization of Eva Peron," said Carlin, the country's largest daily newspaper, in yesterday's edition. 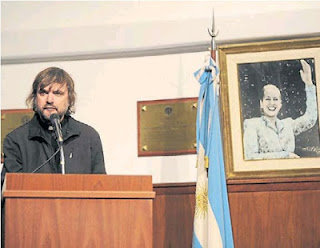 Padre Pepe two days ago in the CGT headquarters

The campaign started with the participation of Father Jose Maria Di Paola, better known as "Padre Pepe". The priest is a friend of Pope Francis.

The union representatives announced that they had obtained the approval of the Vatican and the Argentine Bishops' Conference for the campaign.

Nazaria Ignacia of St. Teresa of Jesus (1889-1942) was born in Spain. In 1906 she moved with her family to Mexico, where she became a nun. In 1925 she founded her own female missionary order in Bolivia, Cruciatarum Ecclesiae Missionariarum. The last years of her life were spent in Argentina, where she created numerous facilities for youth and the poor. In 1992 she was beatified by Pope John Paul II, and canonized in 2018 by Pope Francis

Jose Gabriel del Rosario Brochero (1840-1914) was an Argentine priest who spent his pastoral life as a country pastor. In autumn 2013 he was beatified and canonised in 2016 by Pope Francis.

The Argentinean Hector Valdivielso Sáez (1910-1934), born in Buenos Aires, entered the Christian Brothers in 1926 and accepted the religious name of Benito of Jesus. For teacher training he was sent in 1929 to religious houses in Spain. When an alliance of Catholic parties became part of a coalition government in 1934, the radical left called for revolution in the style of the Bolshevik October
Revolution of 1917. In Asturias, the Revolutionary Committees of Socialists and Communists

ordered all priests to be arrested as "enemies of the people." Brother Benito of Jesus was also arrested while he was doing retreats. Sentenced to death by a revolutionary court, he was executed on October 9, 1934 along with other prisoners. As one of the martyrs of Turon, he was beatified in 1990 by Pope John Paul II and was the first Argentine to be canonized in 1999.

As far as the CGT union is concerned, Eva Peron, the wife of the two-time coup d'état and two-time head of state and government of Argentina, Juan Domingo Peron, should also be elevated to the altars. Eva Peron's "Evita" by Andrew Loyd Webber and Tim Rice, with their hit Do not Cry for Me Argentina, has been "immortalized" since 1976. The main characters of the musical alongside Evita are still her husband Juan Domingo Peron and Che Guevara, the communist revolutionary, guerrilla leader and patron saint of the extreme left and also some parts of the extreme right. 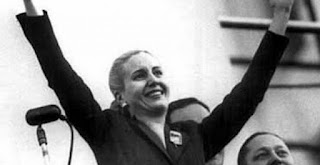 "What the Peronist union CGT demands can take years. A canonization process begins in the diocese in which the candidate died," says Clairin, dampening expectations somewhat.

Eva Peron died on July 26, 1952, at the age of only 33, in the Argentine capital, which is why the
Archdiocese of Buenos Aires is responsible for the opening and first phase of the beatification process, which was chaired by Pope Francis from 1998-2013. The Pope is said to have become a convinced Peronist at a young age. When Peron became president for the first time, Jorge Mario Bergoglio was twelve years old.

Last Tuesday night, the entire CGT leadership was present. The campaign for beatification, according to the CGT secretary-general, is intended to be the prelude to a "counter-culture" which "says everything and is always humble.”


"Eva Peron gave her life for a providential mission, the mission to save the dignity of the human person in its transcendent sense. That was the synthesis of a deep faith in her people and in God. "


"In this deeply Christian, Catholic and humanistic framework, the CGT understands the message and the immense work of Eva Peron."


One wants to compare those who try to gain a hearing "with many words but little knowledge at the lower level" with  market hucksters.

The "canonization" of Peronism

The union also posted a photo showing priest Padre Pepe at the lectern at the CGT union headquarters, along with his campaign launch press release. A logical step, since Padre Pepe is a personal friend of Pope Francis, and the Holy See and, accordingly, the Argentine Episcopal Conference gave the green light to the CGT campaign.

Padre Pepe with Pope Francis in the Vatican.

According to critics, Argentinian Peronism seeks its own canonization and sees it as an opportune moment under Pope Francis and his politicization of the Church. When the Peronists were defeated in the presidential elections of 2015, Francis made no secret of his disappointment and has since then given the elected, non-Peronist head of state Mauricio Macri the cold shoulder. That was "a reason" why Francis as Pope did not visit his homeland, because he did not want to help Macri to a second term by his presence.

At the end of October 2019, the regular elections will take place. In mid-August, the political groups determine their candidates in open primaries. According to polls, neither Macri nor the Peronists can be sure of a victory. However, the Peronists are counting on a return to Casa Rosada, the official residence of the President, from where they have ruled the country 24 out of 36 years since the end of the military dictatorship.

An important role is played by the General Confederation of Trade Unions (CGT), formed in 1930, as in France and Italy, as an alliance of socialists, communists and revolutionary syndicalists. After the 1943 coup d'état, most of the union supported Labor Minister Juan Domingo Peron. When he was dismissed and arrested as a minister in 1945, the CGT called for a general strike. The agitation, in which Eva Peron participated, forced Peron's release. 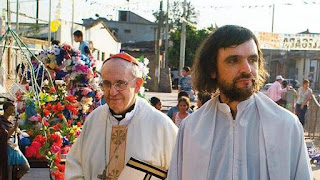 Padre Pepe with Archbishop Bergoglio (Buenos Aires). We have known each other for a long time.

For the presidential elections of 1946, the union founded the Labor Party (PL) and contributed significantly to Peron's election victory. In return, it received half the mandate of the three-party Peronist coalition, the Speaker of Parliament, the Ministry of Foreign Affairs and the important governorship of the province of Buenos Aires, by far the most important member state. In 1947, the three parties dissolved and joined together under Peron leadership to the Peronist Party (PP), which calls itself today Partido Justicialista (PJ). The CGT was the mainstay of Peronism.

With the fall of Peron in 1955, the Peronist movement was banned. In 1966, leading parts of the union supported the coup d'état without reaching an agreement with the new rulers. Radicalization increased in the late 1960s. Underground organizations emerged on the left bank of Peronism, forcibly overthrowing the government and attempting to put Peron back to power. The best-known guerrilla groups were the Montoneros, the ERP and the Peronist Armed Forces (FAP), which also murdered several CGT trade unionists as traitors, including two secretaries-general in 1970 and 1973 (presidents). Their front page included the journal Cristianismo y Revolucion (Christianity and Revolution), which was published in 1966-1971 in the context of Marxist liberation theology, the left-wing priest movement for the Third World and among other things spokesman of the left-wing revolutionary and guerrilla organizations. 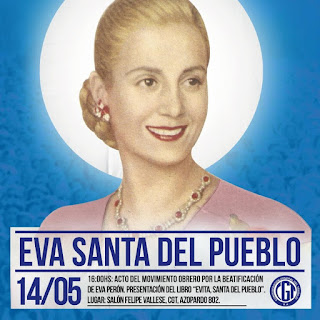 In fact, Peron was able to become president and head of government for a second time in 1973, but died the following year. In office until 1976, his second wife, Isabel Peron, who tried to build on the nimbus of Eva Peron, politically, but could not pacify the country, and was dragged down by rampant favoritism and corruption even deeper into the crisis. When the military took power in 1976 in the midst of chaos, the CGT was also persecuted. Several union representatives were arrested, some disappeared in the hands of the military never to return. Through numerous strikes, especially since 1979, the union pushed from the underground to an end to the military dictatorship that came in 1983.

Since its re-establishment, the CGT is again the largest and most influential union in the country, but has had to share its influence with the split-off in 1992, CAT, also a Peronist but leftist, half-sized union.

With the campaign for the beatification of the former Primera Dama (First Lady) of Argentina, the largest trade union in the country is entering unfamiliar uncharted territory.