Edit: we tend to stay away from the Alinskyite tactics of your Patheos and established bloggers who love to launch hetz-campaigns against people, usually real Catholics, that make them feel bad or threaten their modernist safe spaces.

Father Dwight Longenecker is such a blogger.  Here he is on his Facebook account attacking Catholics for saying what is actually true, that Pope Bergoglio has not only "changed" Catholic doctrine, but actually admitted to changing doctrine. Longenecker portrayed people who believed what was actually true as paranoid, delusional, etc...

Longenecker stuck his neck out a few weeks ago when he libelously said that traditionalist (aka real) Catholics were prone to violence.  When Christopher Ferrara wrote an online and private request for Longenecker's retraction, apparently, Longenecker made a sarcastic apology.  Like a dog back to his vomit.

Why does EWTN hire such evil men to work for them? 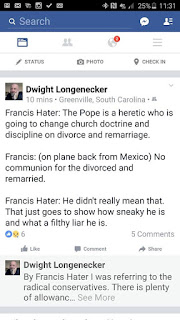 We're not very hopeful, but requests for this priest's dismissal, punishment and the like can be made here. At the very least, we believe he should be banned from the internet like the blameless Father Altier was about 10 years ago when he opposed sex education in Catholic schools.

The Nastiest Catholics of All Time Poll

Edit:  we don't usually do much talking, expressing our own thing, saying things that need to be said.  We have nothing, ourselves, to say that can't be said better by others, but after seeing the film, "Lady in the Trailer," it got us to thinking about how there is a persistent and even orchestrated effort on the part of media companies to portray Catholics in the worst possible light, and how this inveighs the less committed Catholics (Shall we call them NeoCatholics?) amongst us to join in to fit in. Surely someone else can say this better!  So we'll send up a kite! This is also why we've created a poll. We've often wondered if NeoCatholics, who are the fellow travelers of the Leftist, the Trade Unionist and the Secularist, would appreciate a saintly hermit in their midst. (Aren't you just sickened by NeoCatholic accolades for Communists ala Graham Greene, as if that gets you some kind an award or approval?)  We are told that an entire community of lefties did just that for more than 15 years.

The critically acclaimed "Lady in the Trailer" is a film ("that's mostly true") set in a the up and coming Camden Town on the northbound tube just outside of the bustle of London.  It was originally a piece for the New York Times Literary Supplement, a book and then an autobiographical play by Alan Bennett (b. 1934). It covers a time period approximately from 1970 to 1986, and involves a difficult but increasingly close relationship between a van driving, homeless ex-nun and local eccentric, Mary Shepherd, who ekes out a living on the margins of the community, on the charity of the town's more liberal-minded inhabitants, and the aforementioned aberrosexual playwright, Bennett.  More out of annoyance than out of real concern, vexed at his feelings of compassion, Bennett allowed the scrofulous, scatological elderly woman, to park her van in his driveway, despite his obvious hatred for everything she believes and holds dear, which he only dimly and bemusedly understands.

As we come to learn of the personality of this difficult woman and her plight, we discover that she had been, tragically, a very talented pianist who was told to abandon the piano by her religious confessor as an act of obedience to her religious order.  It was this she did.  It is this, we suppose, that led to her destitute condition, her attempt to live out her religious convictions to their most severe and perilously remote end.  Is it a fine religious emotion lived out imperfectly, but triumphantly, or a dangerous delusion which destroyed a promising artist's life and marred her irreparably?  We expect this is what Bennett meant, in between feeling the sorrow of it all without embracing her own religious sentiments.  For all of this, Bennett begrudgingly admires her, she was after all this heroic figure during the London Blitz, who drove an ambulance during the blackout.  With these religious and secular aspirations, her obvious patriotism, it was her thwarted musical gift which led her to profound poverty and mental distress, coupled with the guilt of fleeing the scene where she killed a reckless cyclist on the motorway which put her on the wrong side of the law.  In a Godless secular world, all we see is that wreckage and the human dimension.  This is the view of many NeoCatholics, tragically.

In a very real sense, she is that traditionalist so many people love to despise, even if they have the admirable qualities as Bennett admitted of Mary Shepherd.  And for all of her infirmities, her pseudonymous surname possesses symbolic value, even if it's a name she called herself.  She entered and was thrown out of two religious communities, so she must have had a sincere missionary impulse, and despite rejection by her own religious superiors, she persisted in the faith.  These aspirations to be useful took on various forms, whether the contemplative praying for the soul of the young man she killed and going to Mass every year on the day of his death,  she sits in the street and sells religious tracts, while using the sidewalk as a chalkboard and campaigns for the Fidelis party (Not sure it exists, but we guess that it's a UK version of Belgium's Rexist party, or the Polish?  Anyway, it sounds like OUR kind of party!).  She prays for hours, even shouting at God, returning to the site where she struck her errant cyclist.  She defers to the Mother of God in various and sundry decisions of daily life, even if it is to put those who accost her off balance.  She is a religious Mass-goer, on all days of holy obligation, perhaps even daily, receiving Holy Communion on her knees.  But she's ungrateful, so ungrateful, bigoted  and rude to her posh leftist neighbors, who, driven by guilt, perhaps as much as they were really deep down, decent people, begrudgingly attempt to do her good turns.  This is just the sort of "traditional" Catholic against whom the media repeatedly levels its malice, even if they argue that one is only a victim, as Miss Shepherd evidently was, of the "evil" Catholic Church.  That is the image which so many modern Catholics, even of a more conservative, if not traditional, bent,  want to avoid at all costs, even if they are, as is the case of our friends at places like the Register, possessed of more unpopular positions like opposing same-sex marriage and abortion. It really is a challenge to be a hermit in this day and age!

Religious life, and the history of Catholicism is full of these sorts of apparent failures at life, though, as Alan Bennett states, "her life was far more interesting than mine." Bennett's obvious affection for the cantankerous and "bigoted" old Catholic in his driveway, is not one in which she gives quarter, yet he does what he can to help her, while her own religious order, for which she sacrificed her musical gift, and presumably the Church, leaves her in the cold at the margins.  Shepherd remarks at one point just as she is about to die, that even though her religious superiors didn't appreciate her, "they didn't know what they had with Saint Bernadette either!"  But in the end, she speculates hopefully, if fancifully, considering her enormous sacrifices and poverty in life, that her holiness will lead to the house and van location in North London becoming a place of pilgrimage.

Despite her saintly aspirations, it's the local constabulary, the social services, a gentle Subcontinental doctor, Bahamian nurse's aide,  posh liberals and a humble, but "saintly" gay man, who are the real saints in this portrayal, according to the gay man himself.  His own appeals to the local religious community, who don't wear habits any longer, the local priest, her own family, leave her to be the responsibility of those people we're not supposed to believe do good works: like black social worker, socialist aberrosexual playwright, self-satisfied lefties and a policeman. Maybe his incomprehension is that God has left most religious communities, or at least, they have left Him.   The BBC/NPR crowd.  Thus, it doesn't matter with all of the good the Catholic Church does for the poor, even the official parts of it that have all but given up on God, particularly in London, even at London Oratory (which is always being accused of not being charitable by evil lefties), the most charitable thing we can expect from an aberrosexual playwright and the BBC is a slap in the face.

For his part, Bennett ends the film starting up a more permanent relationship with one of his gentleman callers.  Apparently it's an illicit one, which we are to suppose that the fanciful Shepherd would approve, as she catches him ogling one of the attractive funeral directors at her internment before she is whisked off to heaven to the arms of God the Father.   It's a subtly blasphemous treatment and we don't recommend you see the film for yourself.  You'd be better off reading the life of Saint Bernadette itself than this.

Email ThisBlogThis!Share to TwitterShare to FacebookShare to Pinterest
Labels: Lady in the Van, NeoCatholics, The, World's Greatest Catholics

The Disintegration of the West's Political and Religious Institutions


Edit: Keeping with a central theme this week often touching upon questionable patheos blogs, we thought it would be instructive to post the following video which was posted by two other bloggers known here. This is via North Face via the Bones that Crush.

It's especially interesting in light of recent praise from Deacon's Bench and James Martin SJ (A frequent source of problematic and erroneous opinions), celebrating Thomas Merton, who was himself a card carrying Communist Party member, and who is substanially problematic for many other reasons as well, considering his interest in being a public intellectual which often clashed with his apparent religious vocation as a solitary and Trappist.


Some years back, I wrote a piece for Catholic Digest on “Thomas Merton’s New York.” The story was a pilgrimage, of sorts, visiting some of the landmarks of Merton’s life that are still standing in Manhattan.

In the short video below, Fr. James Martin takes us to two of those landmarks: the church were Merton was baptized and the rowhouse in Greenwich Village where he lived. At the end, Fr. Martin quips that he credits his vocation to four people: the Father, the Son, the Holy Spirit and Thomas Merton.


The unfortunate demoralization of the West continues through such conflicted, inconsistent and frankly deceptive individuals. As one reader observes:


Merton's legacy lives on in the Thomas Merton Award which has been awarded since 1972 to such luminaries as Miguel D'Escoto, Howard Zinn, Ron Dellums, Angela Davis, Daniel Berrigan and Noam Chomsky.

Posted by Tancred at 2:16 PM No comments: