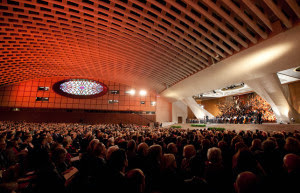 (Vatican) The planned concert for Saturday the 16th of November for Pope Francis at the conclusion of the Year of Faith has been canceled. The Pontifical Council for Promoting the New Evangelization wanted to avoid this so that the chair of the Pope would not remain empty again in the grand audience hall.

The concert was supposed to have taken place at six o'clock in the great today Aula Paolo VI, Audience Hall. Last 22nd of June the same Pontifical Council had organized a "Grand Concert of Classical Music in the Year of Faith" in the same room, also for the Pope. The occasion was also the time of Pope Benedict XVI. proclaimed the religious year. The Symphony Orchestra of the RAI conducted by Juraj Valcuha and the Choir of the Accademia Nazionale di Santa Cecilia conducted the Symphony No. 9 in D minor, Op. 125 by Ludwig van Beethoven. Originally the concert had still been planned for Pope Benedict XVI. The program was then changed for its successor, the hall filled to the last seat, but the seat of Pope Francis remained empty. The faces of the musicians, artists and the 12,000 concert-goers were embarrassed. A visibly embarrassed Curia, Archbishop Rino Fisichella, president of the Pontifical Council for the New Evangelization, explained the absence of "urgent" official business of the church chief.

Pope was absent for two concerts, the Vatican Did not Want the Risk it Again

A few days later, the scenario was repeated. Leipzig's St. Thomas Choir was in the Sistine Chapel for the first time at the invitation of the Holy See, to give a private concert for the Pope. Whose participation had been previously announced accordingly. However, Pope Francis did not appear again. The press office of the Vatican tried to bypass this "detail" after the pictures of the empty chair had been published by the world press. The chair was removed from the Sistine Chapel for safety reasons before the concert.

"I'm not a Renaissance prince"

This Friday morning it had been canceled due to a chill in the planned Audiences for the Cardinals. Failure to attend the concert had been communicated internally but a month ago with the message that the Pope would like a "sober and simple" line. A concert "in his honor" would show him as a "sovereign", an image that displeased the Pope. He preferred to devote himself exclusively to his pastoral ministry. The most prestigious daily newspaper in Italy, the Corriere della Sera a rumor in June that Pope Francis had justified his rejection with the harsh words, "I'm not a Renaissance prince." Since then it has been speculated whether the pope might simply lack the necessary understanding of classical music. It is only known that he appreciates Wilhelm Furtwängler as a conductor and likes tango.

Officially it is the Year of Faith on Sunday, finished November 24th with a Pontifical High Mass in St. Peter's Square, which the Pope will celebrate itself. A few days earlier on Thursday he will visit a contemplative monastery of the Camaldolese on the Aventine, and pray Vespers there.