Imkamp Called to the Archive of the CDF

Edit: he’s one of the most conservative Prelates in Germany, his Masses are often packed and he delivers great sermons.

Ziemetshausen (KNA) Wilhelm Imkamp, pilgrimage director in Swabia’s Maria Vesperbild, is the newest member of the Congregation for Doctrine and the Faith in the Vatican.  The 61 year old Prelate announced on Monday in Ziemteshausen that he had been summoned by Prefect Gerhard Ludwig Müller to the board.

Already at the end of January he was awarded his doctorate in Theology as a regular member of the Pontifical Theological Academy in Rome.  It is one of eleven academies in the field of Catholic Church Government in Rome and serves as a “think tank”, which unifies the various theological schools of thought.  According to the Papal Yearbook, there are 25 more regular members.  The naming is in effective for life. 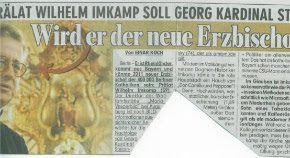 Bishop Mixa's Successor is on the Way
Posted by Tancred at 10:58 PM 1 comment: