I was a Freemason -- The Destructive Effects of Masonic Brothers: The Pope is Enemy #1 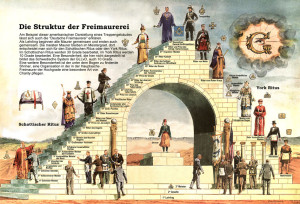 (Paris), the French physician and author Maurice Caillet, a former Freemason and Worshipful Master, who converted to Christianity, was interviewed on 20 February Internet Radio Culturacattolica.it  about Freemasonry, its subversive work and his conversion.
Caillet, son of atheist parents and an  avowed enemy of the Church from youth was entered into a Lodge of Grande Orient of France in 1969 at the age of 35 years in Rennes.   It is one of the oldest and most powerful Lodges. He remained there until the 18 Degree of the Rosicrucians. He was then given access to the higher degrees of the Scottish Rite, which are unknown to  most Masonic brethren of lower grades.  Caillet was interested in the occult, white magic and divination. He was among the French pioneers of family planning in the 70s, and fought for the distribution of artificial contraceptives and the legalization of the killing of unborn children. As a member of the Socialist party and friend of President Mitterand as chair he experienced as master of his lodge an explosive interest in lodge membership after his election. It was also possible for the aspiring master to experience first hand the influence of the Lodge brothers in politics, media, business and public service.
In 1984 he accompanied his sick wife to Lourdes where his life took a radical turn. When he  first witnessed a Mass in his life,  he heard a "soft voice calling me, and not the voice of my conscience, it was still an outer voice. The voice called me by my name and said to me: It is good that you ask me to cure your wife. But what you have to offer me?” At that moment, he offered himself to himself. "It was everything I had to offer. Not a little to be an atheist, who was for 40 years a Church and priest-hater,“ said Caillet in one of his books was about the event at the beginning of his conversion.  Today, he is an honorary member of the Alliance Vita, which advocates for the protection of unborn life.  Caillet committed today are active against divorce, gay marriage, euthanasia, and the lethal drug injection,  because he “is to defend the perfect order of God, against the destructive plans of Freemasonry."
Caillets books are in French, Italian, appeared Spanish, Portuguese and Polish. In German translation, they are not available. On the subject of Freemasonry, he wrote, among other things: The Secret of the Lodges in the Light of Christ (1998), Hedonism and Christianity (2001), With God Nothing is Impossible. The Gift of Healing (2002), Freemasonry: Sin against the Spirit? (2002), the Occult and Christianity. Distinctive Aids (2005), A Catholic and a Mason: is it possible?(2008)
What is Freemasonry?
Freemasonry is nebulous. The people you come in from a variety of motives, such as the purpose of their membership is diverse. What does it claim to be? Officially to the good will and to improve the human race. Human reason with its projections and their justifications is a kind of deity for the Masons.
How it came about?
The legend holds that speculative Freemasonry in the 18th Century was caused by an evolution of the so-called "operational" Freemasonry. The myth claims (but there are various) that modern Freemasonry is the heir of the medieval builders of cathedrals. Therefore, the Masons claim to have exchanged the construction of buildings for the "edification of the world." And by ideas, not practical knowledge.
Is it true that Freemasonry is connected to Judaism?
It depends. It is not easy to say that. It is true that in the interior of the lodge, a certain "compatibility" exists between the Jewish-Hebrew ideology. An entirely heavenly hope and the Masonic ideology, which represents an entirely earthly hope For Christians, this is different.

In reality, it is important to emphasize the ideological impulse comes from the naturalism of Freemasonry, of the natural law philosophy, nominalism and also from Protestantism. The truth is that Freemasonry aims to enforce a universal religion, Judaism a universal God. Also in this respect there is a certain compatibility.
How can you recognize a Freemason? Is it true that there is recognition among characters?
Yes, there are signs. But it is also true that there is a duty of confidentiality. Therefore it is very careful to use these labels over unknowns. I learned, for example, more often, someone that is Freemasonry, because he told me, as a recognition by strange gestures.
How did you leave the Freemasons?
1984. I was with my very ill wife, Lourdes. Since I could not be with her in the pool, I accidentally went into a crypt. I experienced Holy Mass there for the first time in my life. And I suddenly heard himself called by Christ. Then - still I can not explain even these little moments - I went to the pastor after Mass and asked for baptism.
How did the Lodge to which you belonged take your conversion?
As I announced at the meeting (such in each Lodge occurs  every 15 days ), ... very bad, really bad. Nobody looked at me any more. They did not know what to say. The “tolerance” I once knew that  freemasonry has written so large on their banners, the parades they constantly going on, for Catholics, it does not apply. But I had been expecting this: The Pope is the number one enemy of the Masons.
Does France Catholics who are Masons?
Yes, there are Catholics who are Masons ...
Even priests and bishops?
Whether there are Masonic bishops, I do not know for sure. But I know that there are bishops who - you may forgive me the expression - are flirting with Freemasonry and are talking to her. I do not understand ... what the intent of what the aim should be...
What are the things that Freemasonry gives the most attention?
To influence public opinion. Especially on the subject, which carries forward the Freemasonry at the political level and it may deem important to their plans.

Abortion: the time when the law was discussed had exercised enormous pressure on the media to steer the opinion of the masses, but even more pressure was put on the politicians of the rights,  that in 1974 it was then not actually resisted  with determination, so that the law went through without problems.
Today, the topics: gay marriage, relativism, libertinism, contraception, divorce, hedonism, self-indulgence, the rejection of suffering.
Man must be free to indulge in the pleasure. This is the betterment of humanity, to the aims of Freemasonry.
What is the role occultism, esotericism, magic?
Freemasonry would not exist without mysticism, it is a form of esotericism.
And their rituals have to do with all the magic, with the invocation of obscure forces, beginning with the initiation.

The motto of Freemasonry is liberté, égalité, fraternité, it should look familiar. The interpretation of this motto is nothing other than a form of imitation of Christianity.
Even then I wondered sometimes if the devil is present in Freemasonry.
Yes, he is.  I myself have at the moment, get out when I wanted to feel this presence.
Can there be reconciliation between Catholics and Masons?
It is difficult. Even more serious, however, is that the Catholics are not aware of exactly why their membership in the Masons is a grave sin. Many simply do not know. Many say that the Church has not taken further action since 1983 and that the excommunication had been lifted. There is no clarity.
Freemasonry accepts the atheists?
It depends on: The Grand Orient of France, in theory yes. The National Grand Lodge of France, in theory no. But even where this Great Architect of the Universe is, or where some form of belief in God is required, in fact, God plays no role. Deism perhaps.
One speaks in Freemasonry of "lower levels" and "high levels", but also by a marked similarity among the Masonic brethren. What about it?
It's very complicated. The majority of those who enter into Freemasonry have not the slightest idea of ​​what it really is.You just do not know in what they throw themselves into it.
Freemasonry divided humanity into two groups: the initiates, so the learned and the ignorant. In Masonic and non-Masonic.
Who but the low levels, especially the first three degrees has belonged. Not the slightest idea of ​​what is happening in the high degrees
An apprentice does not know what the fellows, the fellows do not know what the master knows. Therefore, those who belong to the lower degrees, are not much more than instruments for superiors. What happens in the "Ateliers de perfectionnement"? An apprentice does not know.
What happens in the "Blue Lodge", in the "Johannesloge", in the "Grundloge". Few people know what is happening. The difference is enormous.
I had it until 18 Degree achieved. Of the high degrees, I know that from the 30th Required degree, that one has to kick the "Tiara of the Popes" with his feet.
The Pope is the number-one enemy. Everyone knows this in reality, even those who do not say it. The Catholic Church is universal, has a Pope who defends the integrity of the faith.  A faith that "defies the world" itself.  The Catholic Church is the enemy of Freemasonry.
What about the claim that Masonic rites are  scientific?
I was a surgeon, a doctor, and I can say that from a scientific standpoint, the Masonic rites are just absurd.
How close is the connection Freemasonry policy?
Since the Second World War we have had in France at least 50 ministers who were members of the Grand Orient. The current Socialist government, for example, is Masonic, very much.
We live in a society based on a Masonic, secular basis, one or two enlightened intellectuals is proposing to convert Christmas into a "Festival of Freedom" or a "Celebration of Children". The Freemasonry is also behind such plans? Oh yes.  Just as in  my time it was behind the plans to legalize abortion. I myself have performed abortions in Brittany.  Actually I was the first one there, and helped to spread this model of "progress and tolerance." And today, the themes are those that we see every day.
Is it true that you pray for the conversion of the Freemasons?
Every day. Many Masons are men who have lost their way.
You got lost looking for answers about life and fate. You know nothing of Jesus. In France today, only a few know about Jesus, as I knew nothing of him, and as I do a lot of land in the boxes. I pray for them.
Translation: Giuseppe Nardi
Bild: Corrispondenza Romana
Link to Katholisches...
Edit: this is a translation from the German which was a translation from French.
Posted by Tancred at 10:07 PM 23 comments: