Trans: Tancred vekron99@hotmail.com
AMDG
Posted by Tancred at 8:59 AM 1 comment:

(Mexico City) Did the figure if Christ in the Criss Inclined its head on Good Friday in the parish of Santa Ana of Tepetitlan in Zapopan, a neighboring town of Guadalajara in the Mexican state of Jalisco on the Pacific coast? 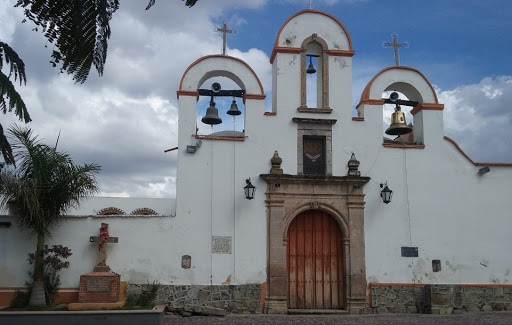 Parish church of Saints Anna and Joachim of Tepetitlan
The incident took place during the Tres Horas (three hours), an extra-liturgical form of devotion, which is widely used in Latin America, and considers the Seven Last Words of Jesus. This devotion goes from 12 to 3 pm of the Good Friday.
Like today, parts of devotion in the Mexican parish were filmed amateurishly by one of the faithful. The records show what they were able to observe with their own eyes: the head of the crucified lower.
The video has received a lot of attention since then. On April 24, Mexican television reported on the incident. Rev. Juan Antonio Guerra Lule speaks of a "divine sign". He prefers not to use the word "miracle": "I would rather speak of a benevolent gesture that has happened exactly at the last word. It was three o'clock in the afternoon, when it came to this movement, which is natural," the priest told Univision.
The Christ representation of the Crucified is more than 300 years old. The life-size figure is most of the time behind a glass pane in the "Holy Sepulcher". Only on Good Friday and on the Day of the Dead (All Saints, All Souls) is it fixed to the cross, which is done by cords, which also make it possible to spread out the arms. The head, however, is not movable.
Video link in YouTube: https://youtu.be/NCGkl4OS3j0
Text: Giuseppe Nardi
Photo: Univision (Screenshots)
Trans: Tancred vekron99@hotmail.com
AMDG

(Paris) On Tuesday, September 27 occurred in Lourdes, the famous Marian shrine in the French Pyrennäen a miraculous healing. During a pilgrimage by the Italian Lourdes Association UNITALSI, pilgrims visited the water basin and the waterway into which the spring water flows that St. Bernadette Soubirous (1844-1879) found at the direction of the Blessed Mother, who told Bernadette on 25 February 1858: "Drink from the fountain and wash yourself." The water is said to have a healing effect. 50 of the 69 recognized miraculous cures are associated with contact with this water.

Among the pilgrims there was also a 28 year old Sicilian woman with a brain tumor, who has been bound to a wheelchair for years. The mother accompanied the daughter in a wheelchair to the waterway. According to numerous coinciding testimonies, the young woman suddenly jumped up from her wheelchair upon arriving at the Holy Door, to the amazement of those present, and ran for joy off towards the grotto where the Virgin Mary had appeared for the first time to Saint Bernadette. After several steps, she stumbled over her own legs. A doctor rushed to her aid and carried out an initial investigation. Priests came near and prayed with weeping for joy, as the young woman got up and was able to move without restriction on her own legs.

As a witness told the press office Basilicata (USB)  that she met the young woman in the afternoon of the same day again. The young Sicilian woman could move around without any help or restriction. When asked where she was going , she replied: "I want to go to Jesus".

On the official website of the Marian Shrine, it states: "According to the Catholic understanding, God heals through the natural elements and the sacraments, through the intercession of the Virgin Mary, the saints and the prayer of Christians. Thus, this water is a sign, not a fetish. Bernadette Soubirous said: "One takes the water like a medicine ... One must have faith and we must pray: this water would have no effect without faith"

The news of a possible miracle cure should be treated with due caution, until appropriate investigations carried out by the competent authorities. In the following video a witness describes the incident.

Email ThisBlogThis!Share to TwitterShare to FacebookShare to Pinterest
Labels: Miracle, Our Lady of Lourdes

Eight weeks after the destruction of the cathedral by bombs in March 1945, when burned even the rosebush, sprouted from his spilled debris root out 25 new shoots.

Hildesheim (kath.net/KNA) The first pink blooms are opening on the famous millennial rose tree at the eastern apse of the Hildesheim cathedral. The main flowering is to be expected in the coming days, according to the Roman Catholic Diocese of Hildesheim this Monday. They should attract many visitors to the Diocesan Church, as they do every year. The legend of the rose tree, a wild dog rose, goes back to the founding history of the Roman Catholic Diocese of Hildesheim around the year 815.

At that time, Emperor Louis the Pious,  built a chapel on the spot where a rose tree had twined about a precious reliquary [Of Our Lady's robe]. Ultimately this chapel was the site of the construction of the Hildesheim's St. Mary's Cathedral, whose outer wall goes back to where the legendary rose tree grows today. It has been testified in writing  for more than 400 years. Eight weeks after the destruction of the cathedral by bombs in March 1945, which even burned the rosebush, 25 new shoots sprouted forth from its spilled debris.

The diocesan church is a UNESCO World Heritage Site, which opened again after extensive renovation work since the summer of 2014. The rose tree, a landmark of the diocese and the city of Hildesheim, is surrounded by a low boxwood hedge. The greenhouse is accessible through a single access point at the cathedral foyer, daily from 10:00 to 18:00 hours. The Hildesheim Rosenstock (C) 2016 CBA

Link to original kath.net...
Posted by Tancred at 10:50 PM No comments: