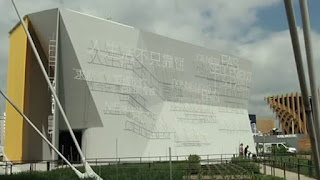 (Rome) Three million euros is what  the Vatican Pavilion at the World Exhibition Expo 2015 in Milan costs. During the event, $ 150,000 were collected in donations. "In respect to the will of the Pope," they will be donated to the refugees in Jordan. This was preceded by an outburst of the Pope about the high cost for the World's Fair pavilion.
The cost of three million US dollars exceed the Vatican aid for victims of Cyclone Pam in the South Pacific, the Ebola virus in Africa, and the flooding of Genoa all together. This put Pope Francis in a state of "rage" when he learned of it. The daily newspaper Il Giornale reported today about the "anger" of the Pope.
The pavilion is 360 square meters in size and financed by the Pontifical Council for Culture with the support of the Italian Bishops' Conference  and the Archdiocese of Milan. The Pontifical Cultural Council is headed by Cardinal Gianfranco Ravasi. The Cardinal who indeed strives to be close to Pope Francis, could now be really far from his favor.
The "exorbitant cost" as it was described by the papal circles are higher than several papal aid projects for the needy put together. The Pope has demanded therefore, that at least the donations collected during the World Expo will go to a relief project.
The funds are now being passed to the Jordanian Caritas. Caritas in Amman is present for the care, housing and education of Iraqi refugees.
Text: Giuseppe Nardi
Picture: Youtube (Screenshot)
Trans: Tancred vekron99@hotmail.com
Link to Katholisches...
AMDG
Posted by Tancred at 10:35 AM 3 comments: