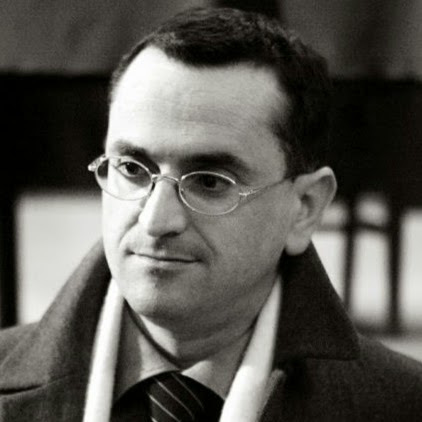 Edit:  a reader let us know, and we worked this out from Nardi's beautiful obituary on a truly great man.

(Rome) Exactly one year ago, on March 9, 2014,  Catholic legal philosopher Mario Palmaro died after a long illness at the age of only 44 years. Palmaro was in his last year, an internationally-known and most astute critic of Pope Francis.
He dedicated his life to defending the Catholic Church. Until his last breath he was an active publicist. "Those who knew him personally, heard his lectures at universities, attended his lectures and read his books, know that he was a real Miles  Christi, and led his good fight to the end with the elegance of a gentleman with mental clarity and lucidity, firmness and freedom of apologists of very different times," wrote the weekly magazineTempi.

Impressive criticism of the pontificate of Pope Francis 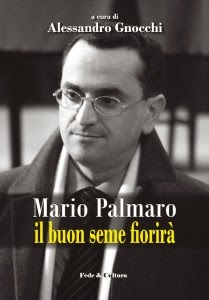 Mario Palmaro: "The good seed will bear fruit"
Because of his criticism of the Argentine Pope, he was dismissed a few months before his death, after ten years of service at Radio Maria Italy. The immediate cause was that he published together with Alessandro Gnocchi on October 9th, an article in the daily newspaper Il Foglio  "Christ is not an option among many, certainly not for his representative on earth - Why we do not like this pope ". A convincing critique of the pontificate of Pope Francis,  whose validity has not changed.
It was a text that was obviously read at the Holy See, for three weeks after his dismissal by Radio Maria for "criticism of the Pope," Mario Palmaro received a phone call from Pope Francis, where he was "surprised, astonished and moved above all". The dismissal by Radio Maria was still not withdrawn.
"For me, as a Catholic, what I experienced was one of the most beautiful experiences of my life. I have assured the pope my unconditional loyalty as a son of the Church.  But also pointed to my duty to remind the Pope that I expressed together with Alessandro Gnocchi very precise criticism of his actions. The Pope  almost didn't let me finish the sentence and said he had understood that this criticism was made ​​of love and how important it is for him to get those," said Palmaro after the announcement of the call in an interview with the newspaper Libero.

"The hope is our certainty"

Immediately before the Pope's call Palmaro and Gnocchi had released another article critical of the Pope: The Church as a Field hospital of the Followers - encouragement inversely proportional to the clarity of the message? In it they wrote the following almost touching, Catholic, descriptive and also prophetic statement:
"In some small isolated church there will always be a priest, who celebrates the holy sacrifice of the Mass, in some small apartment there will always be a lonely old woman who prays the rosary with unwavering faith, and in some hidden corner there will always be a nun, who provides for a child whose life is regarded by all as worthless. Even when everything seems to be lost, the Church, the city of God continues to exude its light on those human beings."

Mario Palmaro was born on June 5, 1968 in Cesano Maderno, a small town in the northern Lombardy. He studied law at the University of Milan, he graduated with a thesis on abortion. After he specialized in studies at the Institute San Raffaele in Milan on bioethics, he was a research associate at the Center for Bioethics at the Catholic University of Milan. Finally, he taught bioethics at the Regina Apostolorum Pontifical University in Rome and Theoretical Philosophy, Ethics, Bioethics and Philosophy of Law at the European University of Rome. A rich intellectual exchange with another defender of the Catholic cause, the historian Roberto de Mattei, arose at the European University. Palmaro was one of the most passionate defenders of the Motu Proprio Summorum Pontificum of Pope Benedict XVI. and was one of the strongest critics of a "miserable, sometimes seedy small mind" with which some bishops impede the Motu Proprio.
Palmaro was the President of the Right to Life Association Committee  of Truth and Life and was a member of the Association of Lawyers for Life and the Catholic Lawyers Association of Italy.
Together with the Catholic journalist, Alessandro Gnocchi, Palmaro published several books and numerous essays and articles. Palmaro and Gnocchi were a congenial duo of sharpness of thought and  fluency.
Mario Palmaro is survived by his wife and four minor children.

Books for the first anniversary of death

Since 2000 Palmaro has published in the Catholic monthly magazine Il Timone.  Now all of  his contributions have been collected in one volume. "A period piece and a chronicle of events in the Church and the world at the beginning of the third Christian millennium by an unerring chronicler," writes the magazine. The proceeds will go to support the widow and four children.
Already since 2 March, a book about Mario Palmaro available in bookstores. "Il buon seme fiorirà" (the good seed will bear fruit), edited by his longtime friend Alessandro Gnocchi. Last Saturday it was presented by Gnocchi and his friends and colleagues in the Cathedral Bookstore of Monza, in Palmaro's  hometown. Following this, a requiem for Mario Palmaro in the traditional Roman rite was celebrated in Monza. On today's memorial an office of the dead will be celebrated in Monza Cathedral.
Edit: At present we know of no titles available in English.
Text: Giuseppe Nardi
Image: Riscossa Christiana
Trans: Tancred vekron99@hotmail.com
Link to Katholisches...
AMDG 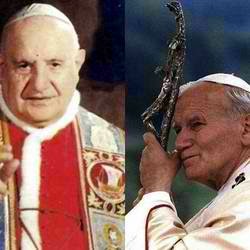 Since September 12, the Church has recognized seventeen popes, who are recognized in the General Roman Calendar, but only four of them possess an mandatory feast.  Three of the four are from the first Christian millennium: St. Gregory the Great (3 September), the Saint Cornelius (September 16, together with the Holy Cyprian), and the  Saint Leo the Great (November 10). Only one holy Pope, whose memory is binding on the universal Church, comes from the second Christian millennium, Saint Pius X (August 21).
The other canonized popes, including John XXIII. and John Paul II., have inclusion in the General Roman Calendar, but their memorials are   not binding. With the exception of the two thereto, and to two other popes, the saints of Gregory VII. (May 25), and Saint Pius V. (April 30), they all belong to the early Christian centuries.
They are Saint Fabian (20 January), the Saint Martin I. (13 April), St. John I. (May 18), Saint Sixtus II. (August 7), Saint Pontian (13th August, along with the antipope Hippolytus of Rome), the Saint Calixtus I. (Oct. 14), Saint Clement I. (November 23), the Saint Damasus I. (December 11), and the Saint Sylvester I ( December 31).
Text: Settimo Cielo / Giuseppe Nardi
image: Settimo Cielo / Traditio Catholica
Trans: Tancred vekron99@hotmail.com
AMDG
Posted by Tancred at 9:42 AM 2 comments: